Silicon is one of the most widespread elements in the natural world and, as such, this makes it a very interesting and useful element to study using NMR. Over the past few decades, a wide range of silicon-containing compounds have been investigated using both solid- and liquid-state NMR techniques. For example, siloxane polymers, which are extensively used in biomedical and cosmetic applications, have been extensively studied by NMR to understand their structure and individual building blocks. Similarly, the structure of silicates, zeolites and other materials have been studied by silicon NMR. Silicon NMR has been shown to be a powerful tool for the determination of active end groups, cross-linking moieties and polymer sequencing.

Practical Aspects
Of the isotopes of silicon, only 29Si is NMR active. It has a natural abundance is 4.7% and the gyromagnetic ratio is 8.465 MHz/T, giving 29Si an NMR frequency of around 12.3 MHz on a Spinsolve 60 system and a receptivity (sensitivity) a little over double that of 13C. In addition, 29Si is a spin-1/2 nucleus, so its lines are sharp since there is no quadrupole moment. Unfortunately, though, 29Si T1s can be very long indeed, which means that long repetition times (relaxation delays) are usually needed, which in turn limits the amount of signal averaging we can do. Furthermore, we can’t use the “trick” that we use in 13C experiments where we apply proton decoupling during the relaxation delay to enhance the signal intensities via the NOE because in a 29Si experiment this has the effect of reducing the signal intensities (due to the negative NOE). Help is at hand, though: by using experiments like DEPT instead of standard 29Si{1H} experiments, we can enhance the intensities of the 29Si signals by transferring polarisation from proton to silicon. Since the repetition times in DEPT are dictated by the proton T1s, we can use much shorter repetition times and collect more scans, also improving the signal-to-noise.

Example Spectra
Figure 1 below shows a 29Si{1H} spectrum of a sample of neat 1,1,3,3,5,5-hexamethyltrisiloxane, collected in 15 minutes. 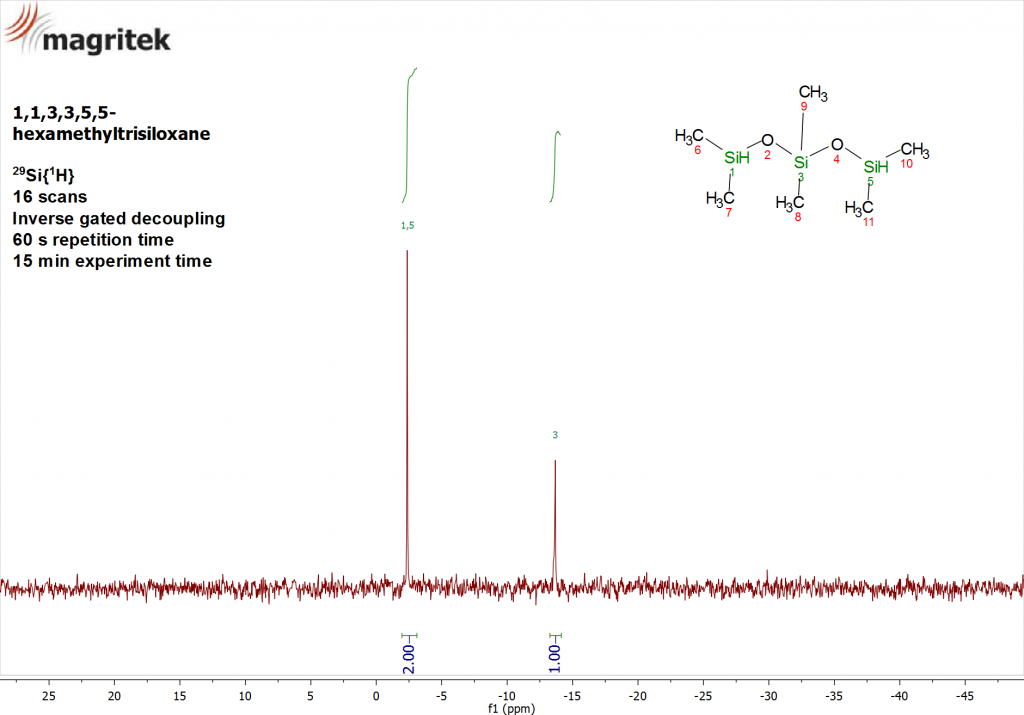 The spectrum shows decent signal-to-noise, and the integral ratios of the two peaks make assigning them straightforward. To illustrate the benefits of DEPT for 29Si measurements, Figure 2 below shows a 29Si-1H DEPT-45 spectrum of the same compound, collected in four minutes. Note the improved signal-to-noise and reduced experiment time compared to the standard 29Si{1H} experiment. 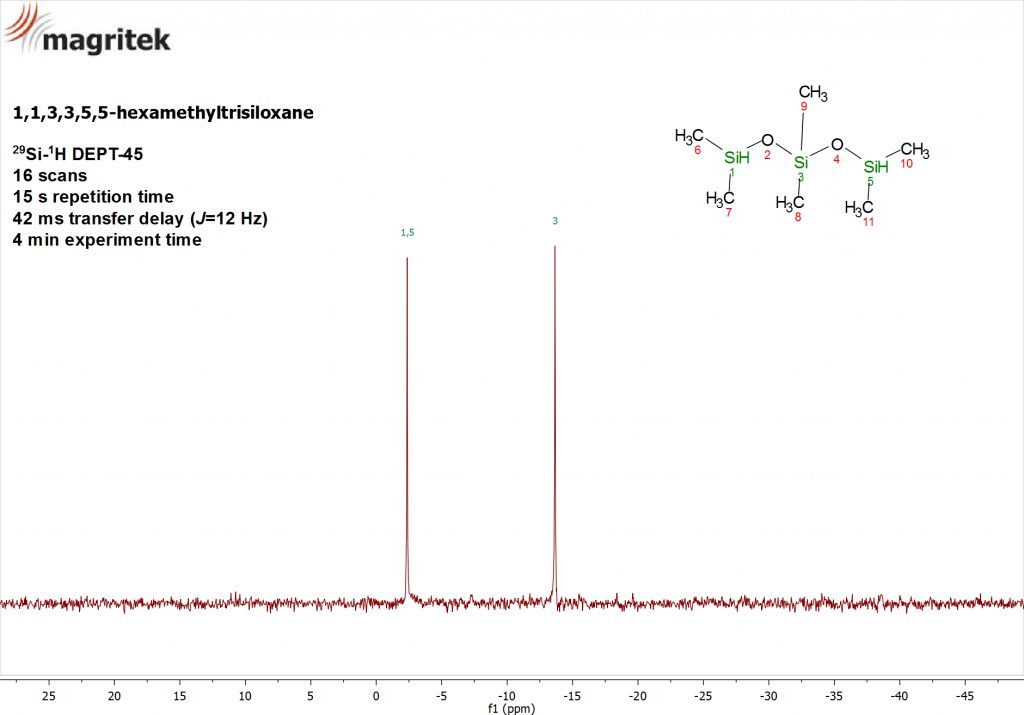 Below are some spectra for another compound, poly(dimethylsiloxane-co-methylhydrosiloxane). First up is a standard 29Si{1H} spectrum (Figure 3), collected using 512 scans and a repetition time of 60 s, giving a total experiment time of 8.5 hours. Three distinct groups of signals can be seen in the spectrum, corresponding to the dimethylsiloxane, methylhydrosiloxane and end groups in the copolymer.

Figure 4 below shows DEPT-45 spectrum collected on the same sample. See how much quicker it took to collect the DEPT spectrum compared to the standard one above (11 minutes vs 8.5 hours!). 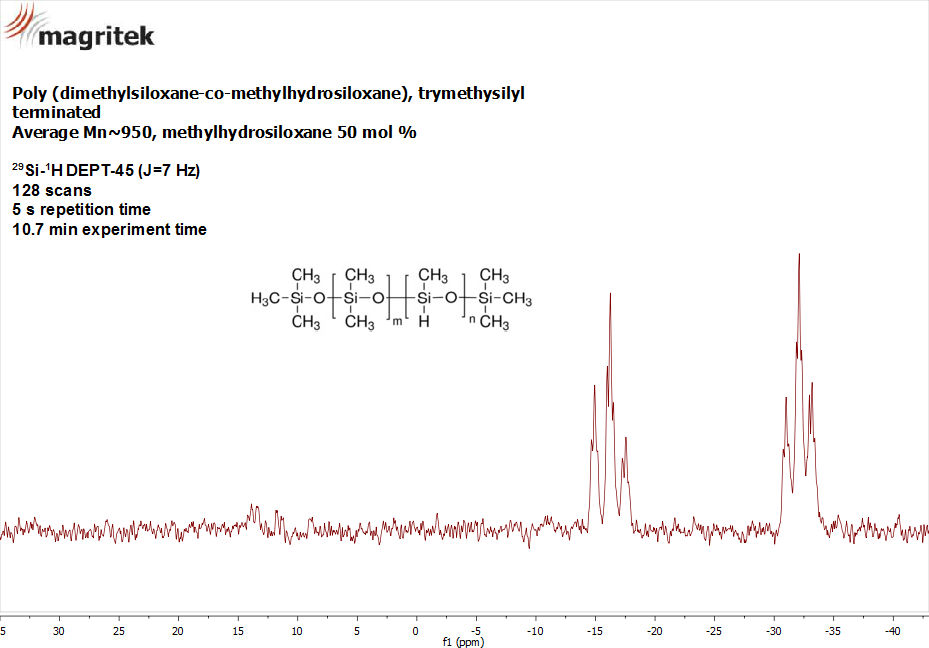 We can go further with DEPT if we like and run a DEPT-90 experiment optimised for a one-bond 29Si-1H coupling of 250 Hz. Here we only see a signal from the silicon of the methylhydrosiloxane repeat unit, as shown in Figure 5 below. 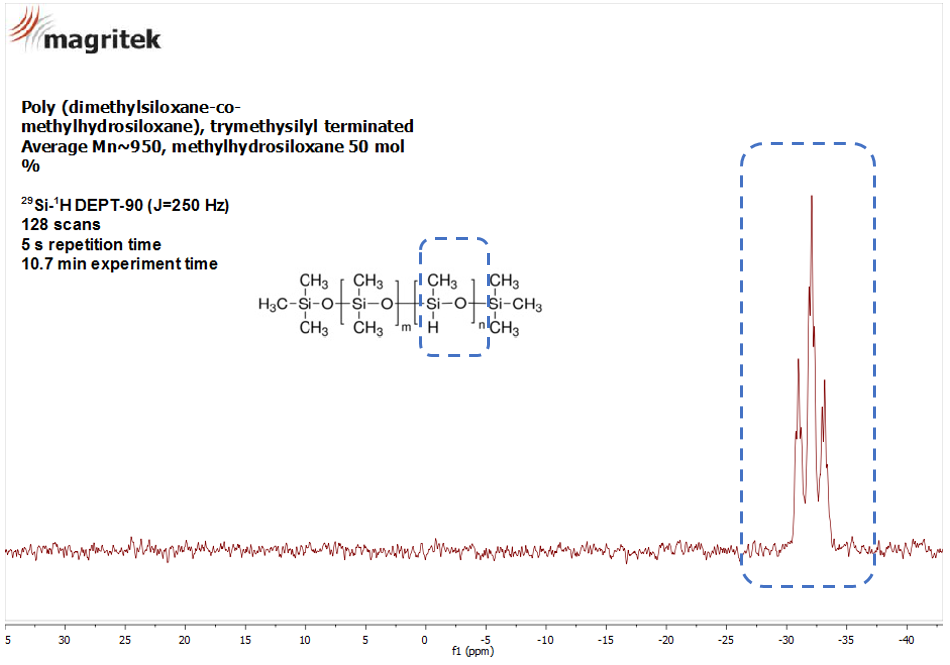 In my next post, I’ll show how we can go further with silicon NMR by delving into the world of 2D experiments. In the meantime, if you’re interested in the Spinsolve Silicon system and/or have some samples you’d like us to collect data on then let us know!