1H NMR spectra of fatty acids show some characteristic signals corresponding to the different chemical groups in the molecules that can be used to quantify the amount of saturated, mono-, double-, and triple-unsaturated chains in the sample. The figure below shows for example the 1H spectrum of linoleic acid, where the methyl group ω1 (♦), α-CH2 (♦), β-CH2 (♦), the olefinic hydrogens (♦), the allylic CH2 (♦), the bis-allylic CH2 (♦), and the rest of the methylene CH2 groups overlapping at about 1.3 ppm can be observed.

The COSY sequence is a two-dimensional homonuclear experiment that shows correlations between chemical groups that belong to the same molecule. The figure below shows the COSY spectrum where the correlations between different chemical groups in linoleic acid can be observed. For example, the bis-allylic hydrogens show correlation with the olefinic ones (♦) and also with the allylic ones (♦) although the last one is a long range coupling. By setting 256 steps along the indirect dimension, 4 scans per step, and a repetition time of 4 seconds, a total experimental time per spectrum of 1 hour was required. Most cross peaks can be identified in measurement times of just 2-5 minutes, but a longer experiment shows finer details. 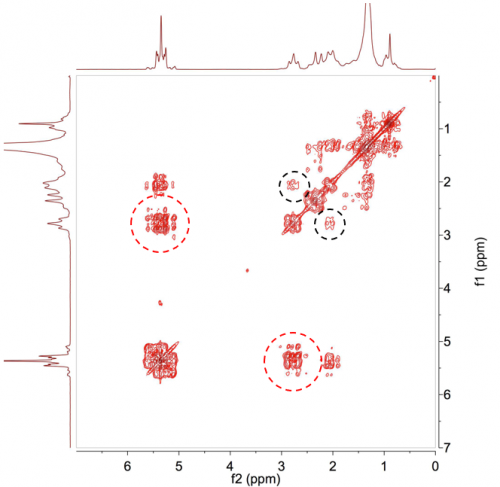 The HSQC is a powerful sequence widely used to correlate 1H nuclei one-bond coupled with 13C nuclei. The Spinsolve is equipped with a multiplicity-edited version (HSQC-ME) of this method. It provides the editing power of the DEPT-135 sequence, which is useful to identify the signal of the CH2 groups (blue) from the CH and CH3 (red). The figure below shows the HSQC-ME spectrum of linoleic acid in CDCl3, where all the expected 1H-13C correlations can be identified. The signals of the methyl and the olefinic groups appear in red, while the rest of the peaks are blue confirming that they correspond to CH2 groups. The data was acquired using 128 steps along the indirect dimension and 8 scans per step. Setting a repetition time of 3 seconds a total measurement time of 50 minutes was required for the measurement. 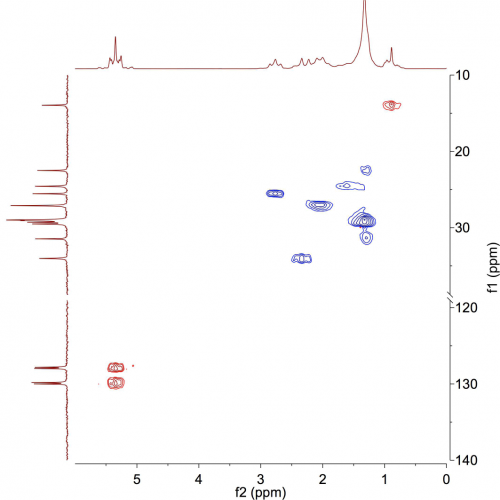 To observe long-range 1H-13C correlations through two or three bond couplings, the Heteronuclear Multiple Bond Correlation (HMBC) experiment can be used. It shows correlations between hydrogens and carbons that are farther than one bond away and no signal for the single bond neighbours, including the coupling with quaternary carbons. To read the HMBC spectra select first the position of a given 1H group along the horizontal axis and move along the vertical direction to confirm the correlation with the different carbons. For example, the methyl 1H show correlation with the ω2 (♦) and ω3 (♦) carbons. The spectrum of linoleic acid shows some characteristic correlation peaks, like the ones between the bis-allylic 1H and olefinic 13C (♦) and between one pair olefinic 1H with the 13C of the other pair (♦). 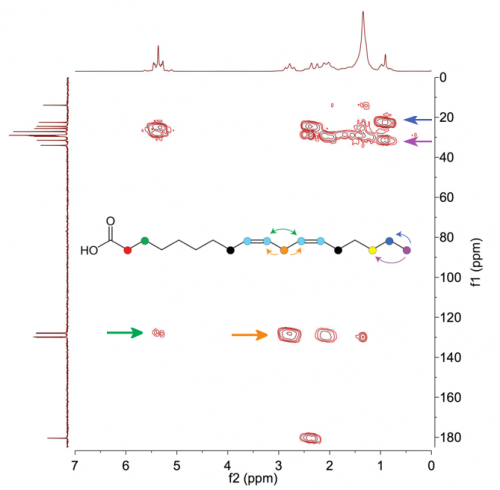