In Vietnam, for the observation of animals in the jungle of the national park of Cat Tien (and in other parts of the country and in Asia), the rangers give the tourists leech socks and a repellent cream for land leeches to put on the socks. Land leeches are terrestrial blood-sucking worm-like parasites. Reading the cream container, I noticed that it contains diethyl phthalate (DEP). Out of curiosity, I dissolved some of the cream in CDCl3 and acquired a NMR spectrum with the Spinsolve 80 MHz benchtop NMR spectrometer.

The 1D 1H spectrum confirms that the cream is mainly composed of diethyl phthalate (Fig. 1, a). A zoom of the spectrum (Fig. 1, b) shows the presence of some additional compounds overlapping with the 13C satellite peaks of DEP (0.55% of the main peaks). To simplify the identification of the additional compounds present in the cream I acquired a 1D 1H spectrum using the carbon decoupling protocol available in the Spinsolve software (Fig. 1, c). This method removes the satellites from the spectra making it possible to detect compounds dissolved at concentration smaller than 1% with respect to DEP.

Typical excipients used in such creams are fatty acid mixtures from butter and/or oils, glycerol/glycine, alcohol (multiplet ~ 3.5 ppm, CH2-OH) and PEG based compounds (peak ~ 3.6 ppm) and even perfume(s).

In our case, the fatty acid peaks are easily recognized. The terminal methyl of fatty acids is observed in region F around 0.8 ppm, the aliphatic chain in region E and probably under the CH3 of DEP, and the olefinic protons of saturated fatty acids around 5.2 ppm in the region A. As no signal is observed around 2.8 ppm, the saturated fatty acids present in the cream are mono unsaturated. The singlet at 2.47 ppm (singlet C) could be a residual solvent like DMSO or 1,3-dioxan, common solvents contaminating cosmetic cream. To check this hypothesis, ~ 2 µL of solvent was added. If the cream contains the solvent, the integral of peak C would increase, but in our case new peaks were observed (data not show). Region B correspond to a CH3 group next to a (mono or di) substituted aliphatic. The area D could be a triplet with a J coupling of 7 Hz. These peaks probably belong to a perfume, where the additional peaks of the perfume molecule overlap with peaks of DEP. 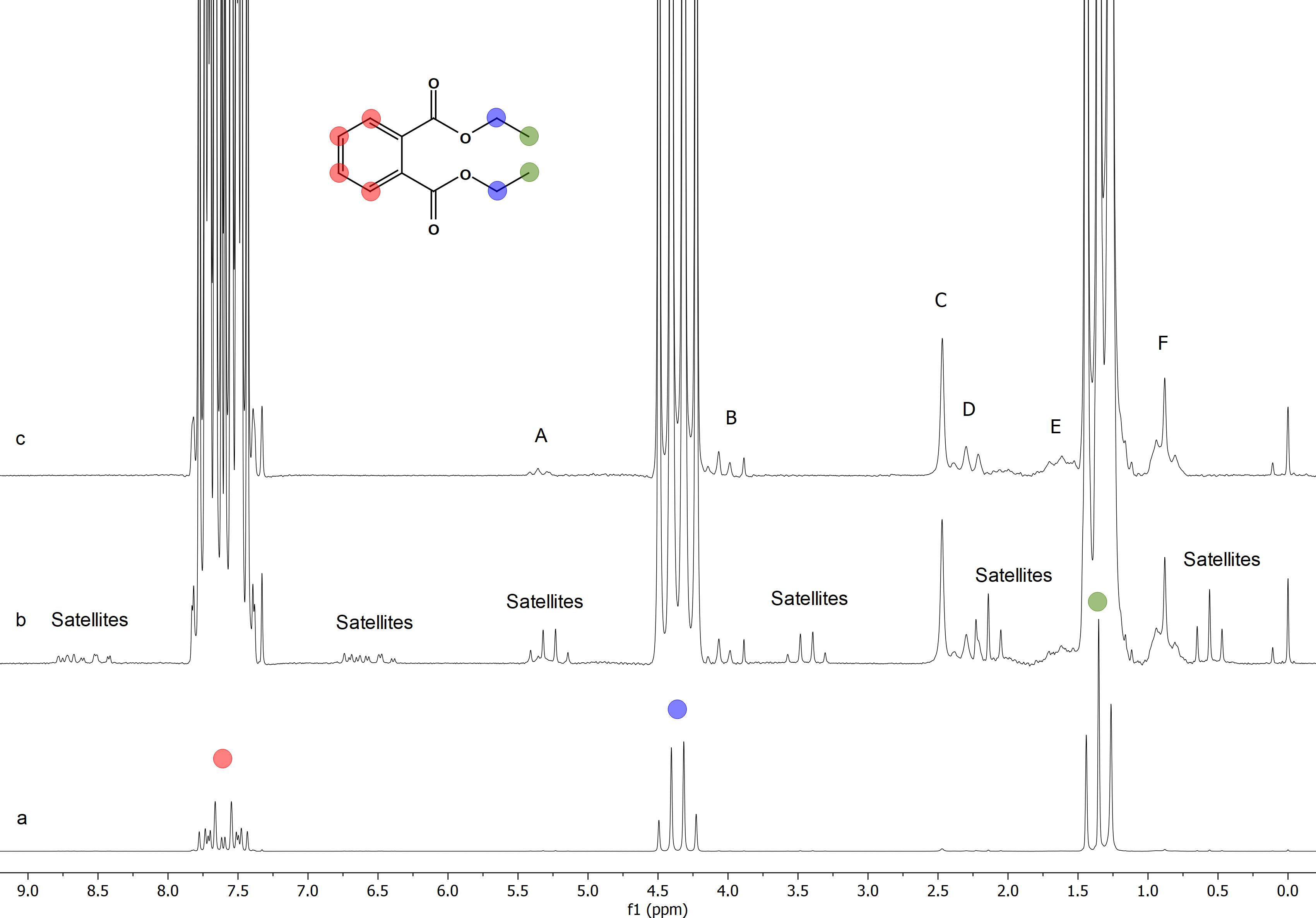 This example shows how easy it is to quantify with a Spinsolve the concentration of active ingredients in a cream (in this case DEP). Once the calibration curve is recorded, it is straightforward to quantify any sample containing DEP, or even every phthalate, as the aromatic peak are present in the same region. Moreover, a tool is available in the software to fully automate the acquisition and the quantification, so that a non-trained NMR operator can get the value with a single click in the software.