Structure verification of Brucine by advanced homo and heteronuclear NMR.

While for small molecules standard 1D proton measurements are mostly sufficient to do a full structural assignment, larger molecules often require the information from additional homo- and hetero- nuclear correlation experiments for an unambiguous assignment. As for such molecules often only a limited amount of substance is available it is important that the NMR-spectrometer provides high sensitivity and high resolution to get high quality data in short measurement times. In the current case study we demonstrate how fast our Spinsolve Carbon 80 MHz can collect 1H and 13C experiments to do a full structural assignment of Brucine (2,3-Dimethoxystrychnidin-10-one), which is an alkaloid structurally related to strychnine, but less toxic. Figure 1 shows the 1H NMR spectrum of a 100 mM Brucine sample in CDCl3 measured in a single scan taking 15 seconds to acquire. 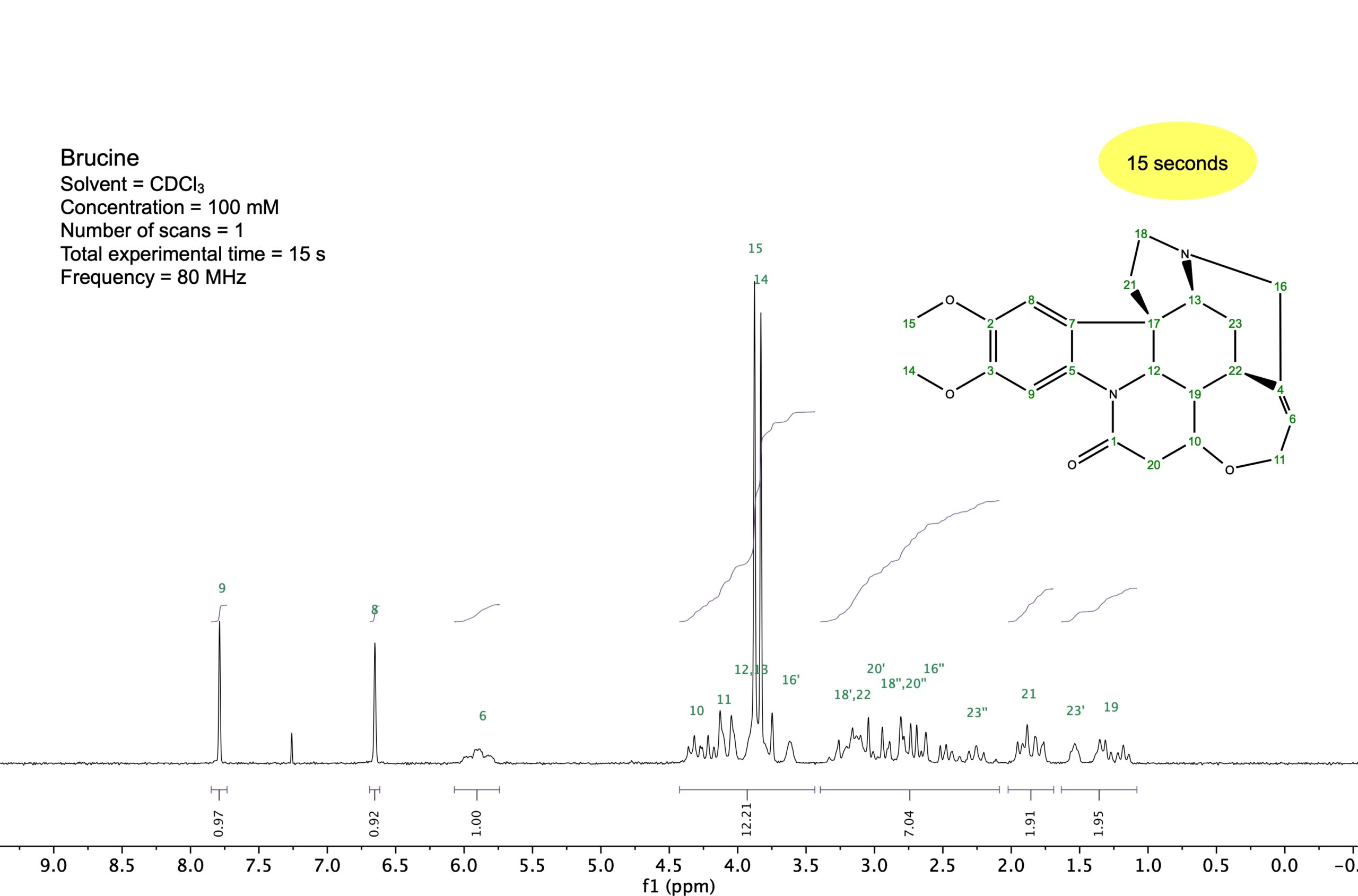 Figure 1: 1H NMR spectrum of a 100 mM Brucine sample in CDCl3 measured on a Spinsolve 80 MHz system in a single scan.

The 2D COSY experiment allows one to identify coupled 1H nuclei as they generate cross peaks out of the diagonal of the 2D data set. In Figure 2 a large number of cross peaks can be nicely observed. For example, the proton 19 couples to proton 10 (light blue), 12 (orange), and 22 (pink). In addition, the couplings between protons 8 and 9 (dark blue), 8 and 15, 9 and 14 (dark green), 6 and 11 (light green) are marked on the spectrum. 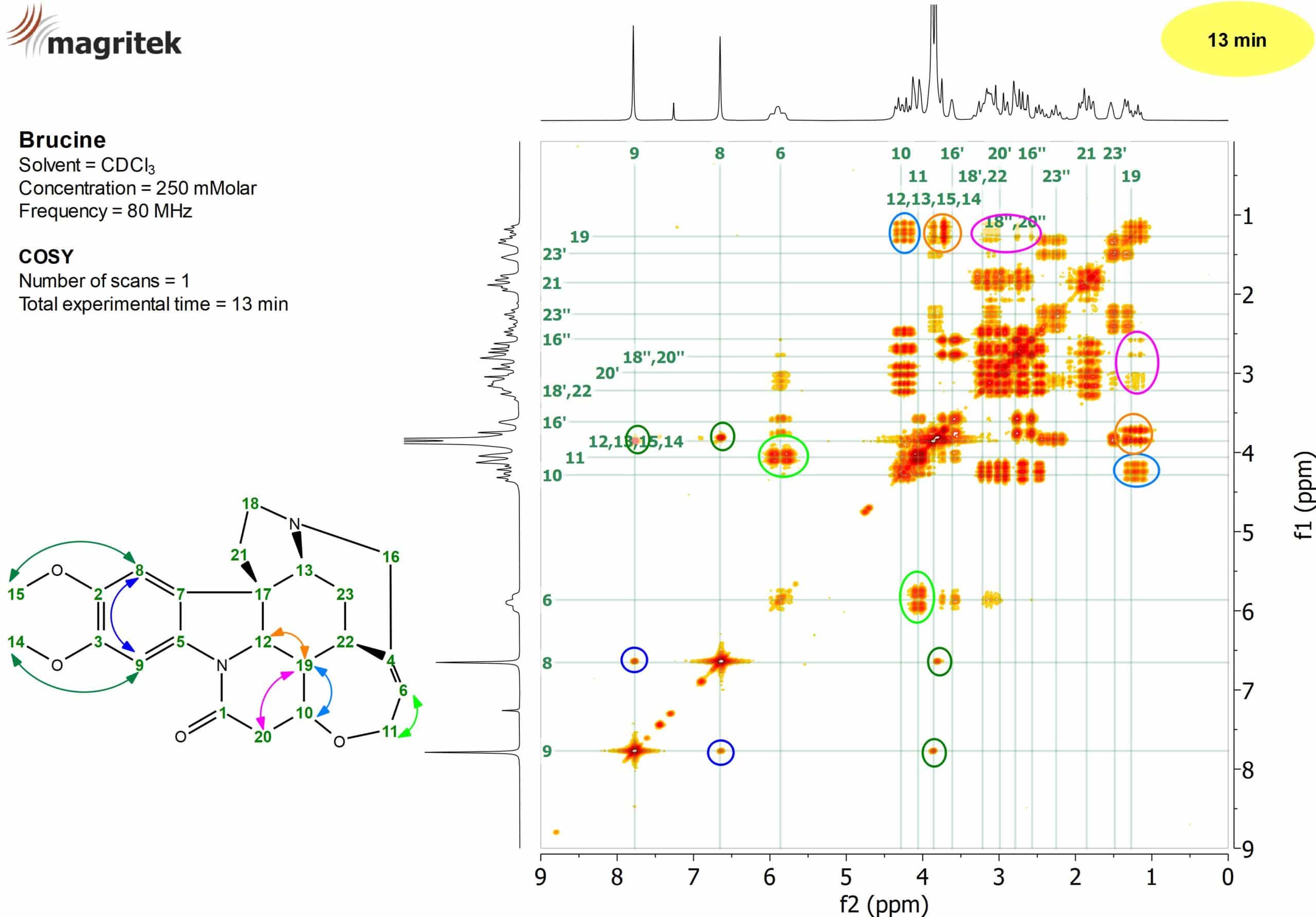 Figure 2: 1H 2D COSY experiment of a 250 mM Brucine sample in CDCl3 acquired in 13 minutes on a Spinsolve 80 MHz system.

Figure 3 shows the 13C NMR spectrum of 1 M Brucine in CDCl3 acquired using NOE polarization transfer from 1H to 13C and 1H decoupling. The 1D Carbon experiment using NOE is sensitive to all 13C nuclei in the sample. It clearly resolves all the expected resonances. 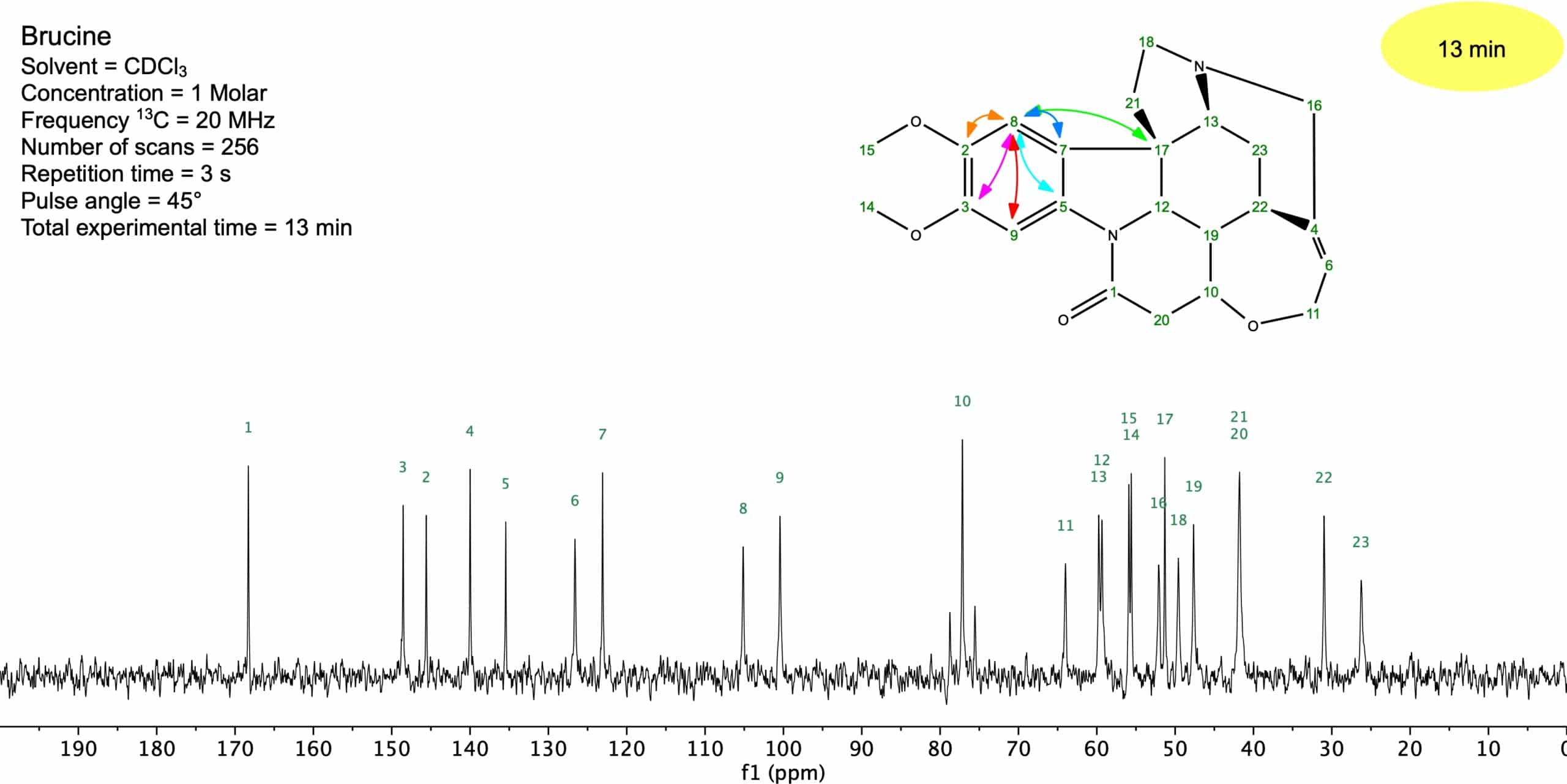 The HSQC and HMBC are powerful sequences widely used to correlate the one-bond coupled 1H-13C nuclei and long range 1H-13C, respectively. The Spinsolve is equipped with a multiplicity edited version (HSQC-ME) of this method. It provides the editing power of the DEPT-135 sequence, which is useful to distinguish the signal of the CH2 groups (blue) from the CH and CH3 (red). Thanks to the higher sensitivity of these sequences, compared to direct detected 13C experiments, samples with lower concentrations can be measured in relatively short times. Figure 4 shows the HSQC-ME (left) and HMBC (right) spectra of a 300 mM Brucine sample in CDCl3 acquired in 34 minutes per experiment. The HSQC spectrum resolves all coupled 13C and allows one to resolve the 1H signals that overlap in the 1D proton spectrum. On the other hand, the HMBC shows the long-range correlations that are useful to identify and assign the different peaks in the spectrum. As an example, we marked on the HMBC spectrum the cross peaks of proton 8 with carbons 2, 3, 5, 7, 9, and 17 (the sequence shows the correlation with quaternary carbons, too). 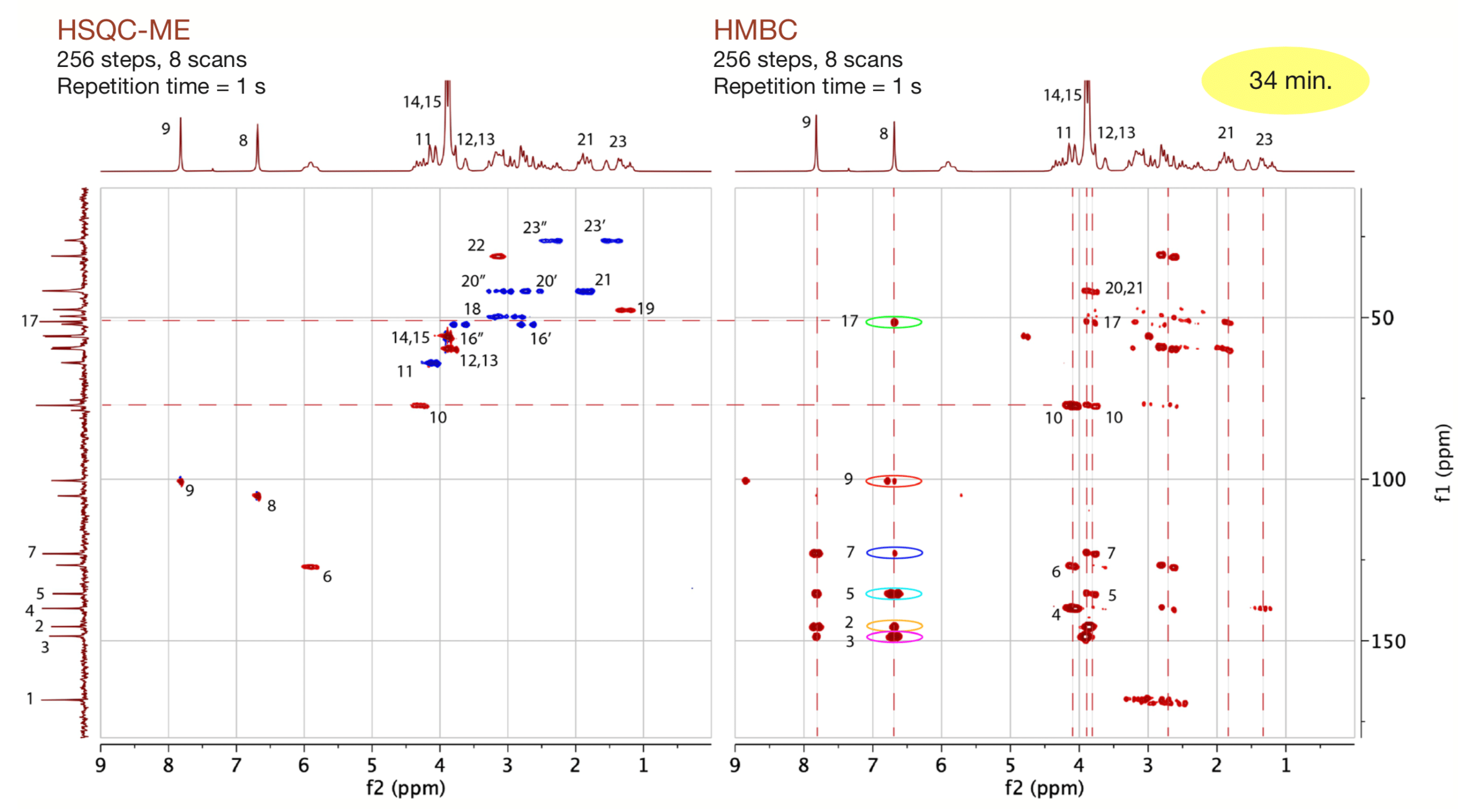 Figure 4: HSQC-ME (left) and HMBC (right) spectra of a 300 mMolar Brucine sample in CDCl3 showing the correlation between the 1H
(horizontal) and 13C (vertical) signals.