176. Quantification and mapping of tissue damage from freezing in cod by magnetic resonance imaging 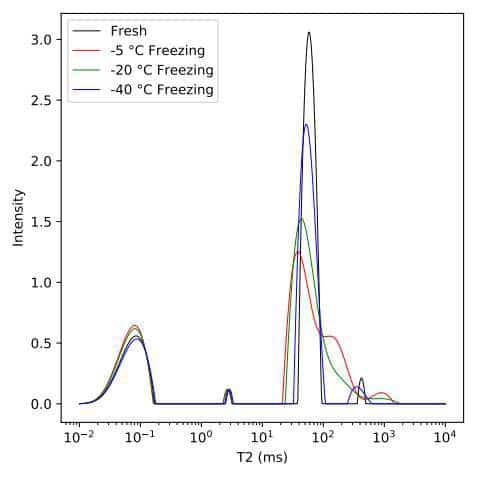 Freezing of fish is an important processing method that can extend the shelf life of the product but can also lead to significant damage to the tissue if performed incorrectly. In order to thoroughly evaluate different freezing protocols, a method to characterize the extent and distribution of damage from freezing is needed. Magnetic resonance imaging (MRI) was tested as a technique to map and quantify tissue damage from freezing in fish. Groups of packaged cod (Gadus morhua) loin were frozen to either −5, −20, or −40 °C, thawed and then imaged with a T2-weighted MRI sequence. Areas of damage appear as bright clusters in the muscle tissue. To provide repeatable, objective classification, image analysis using a convolutional neural network was then performed on the MRI data to identify regions of damaged tissue. As expected, the colder the freezing procedure, the less damage the process generally produced. Results show non-uniform damage throughout the fillet, with tissue damage due to freezing concentrated in the center of the fillet. This suggests that surface limited methods, such as hyperspectral imaging, may not fully capture the extent of damage due to freezing and thawing. The percent of tissue classified as damaged by the neural network generally correlated well with liquid loss (cor = 0.83).