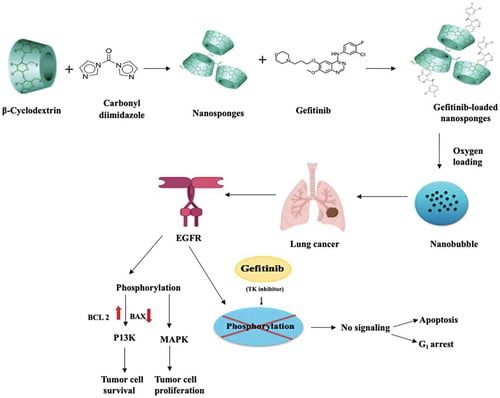 The present research work aimed to develop and characterize nanobubbles (NBs) for synergistic action in human cell line A549 using gefitinib and oxygen. NBs were prepared by loading oxygen in β-cyclodextrin-based inclusion complex (IC), whereas in nanosponges by polymer condensation method. Initially, the amino-functionalization was performed using (3-aminopropyl) triethoxysilane and then, underwent PEGylation to achieve site-specific action. The loading capacities of PEGylated and non-PEGylated NBs of gefitinib were found to be 85.11 ± 2.31% and 86.14±1.24%, respectively, whereas oxygen levels were found to be 2.8mg/L and 6.9mg/L, respectively. The synergistic effect of gefitinib NBs was observed by flow cytometry due to apoptosis of cell line A549 (with apoptotic rate ranged from 35.2±2.15% to 73.6±1.57%) by inhibiting EGFR pathway and further confirmed using western blotting technique. Dual delivery of gefitinib and oxygen from β-cyclodextrin-based nanosponges showed that NBs act as a novel therapy in the treatment of non-small cell lung cancer.