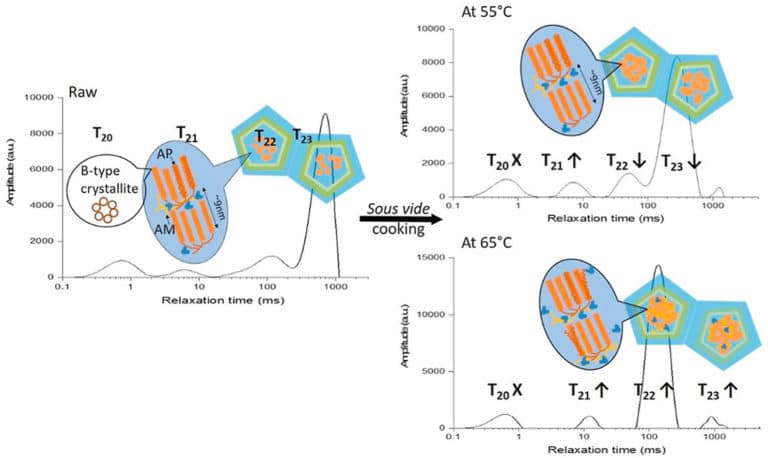 Sous vide processing of potatoes followed by retrogradation was investigated with an intention to create processed potatoes with resistance to starch digestive enzyme during oral-gastro-small intestinal digestion in vitro. Potato cv. Agria (A) and cv. Nadine (N) were sous vide processed at two temperatures (55°C or 65°C). Resulting starch granules of A55 and N55 were intact with limited swelling relative to their raw counterparts. Gelatinisation onset (To) and peak (Tp) temperatures of both A55 and N55 were higher than for Araw and Nraw, displaying enhanced crystalline perfection. Raw cv. Agria with higher relative crystallinity, 27% increasing to 32% showed less change than cv. Nadine did (from raw, 23% to N55, 33%) after sous vide cooking. The increase in relaxation time T21 of A55 and N55 over that for Araw and Nraw indicated that the water pool associated with amorphous starch and crystalline regions became mobile. Thermal characteristics of A65 couldn’t be discerned, whereas the To and To of N65 were higher than for Nraw or N55. Sous vide (at 65°C) cooked-chill cv. Agria had significantly lower estimated glycaemic index (58) than traditionally cooked-chill tuber (73) but increased (77) upon reheating.