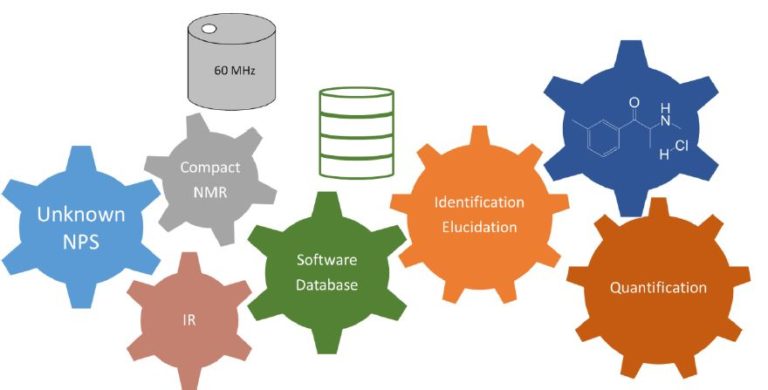 New psychoactive substances (NPS) have become a serious threat for public health due to their ability to be sold in the street or on internet. NPS are either derived from commercial drugs which are misused (recreational rather than medical use) or whose structure is slightly modified. To regulate NPS, it is essential to accurately characterize them, either to recognize molecules that were previously identified or to quickly elucidate the structure of unknown ones. Most approaches rely on the determination of the exact mass obtained by High Resolution Mass Spectrometry requiring expensive equipment. This motivated us to develop a workflow in which the elucidation is assisted with databases and does not need the exact mass. This workflow combines 1D and 2D NMR measurements performed on a benchtop spectrometer with IR spectroscopy, for creating a multi-technique database to characterize pure and mixed NPS. The experimental database was created with 57 entries mostly coming from seizures, mainly cathinones, cannabinoids, amphetamines, arylcyclohexylamines, and fentanyl. A blind validation of the workflow was carried out on a set of 6 unknown seizures. In the first three cases, AF, AB-FUBINACA, and a mixture of 2C-I and 2C-E could be straightforwardly identified with the help of their reference spectra in the database. The two next samples were elucidated for the first time with the help of the database to reveal NEK and MPHP substances. Finally, a precise quantification of each characterized NPS was obtained in order to track NPS trafficking networks.