306. Complexes of 3d Metals with a Bulky Carbazolyl Ligand 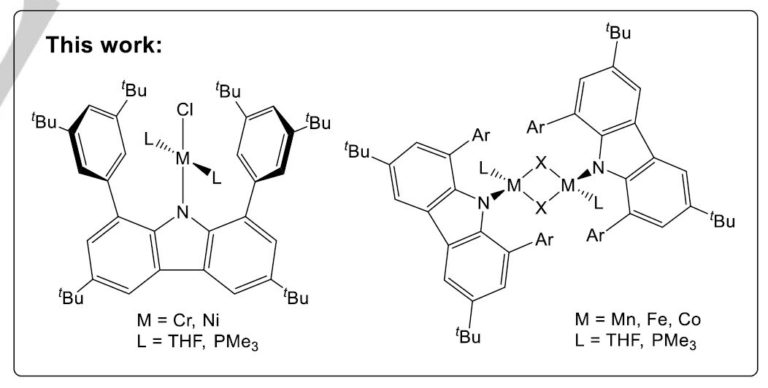 In this contribution, the synthesis and properties of nine novel 3d metal complexes are reported. As supporting ligand scaffold, the bulky 1,8-bis(3,5-ditertbutylphenyl)-3,6-ditertbutylcarbazole (R) was employed. After deprotonation and salt metathesis reactions, a series of four complexes, the dimeric [RMn(THF)(µ-Cl)] 2 ( 1a ), [RFe(THF)(µ-Cl)] 2 ( 2a ), and [RCo(THF)(µ-Cl)] 2 ( 3a ) as well as a monomeric [RCr(THF) 2 (Cl)] ( 4a ), were obtained, while the analogous Ni(II) complex remained elusive. However, incorporation of PMe 3 as stronger donor molecule in comparison sufficed to stabilise also the Ni(II) complex [RNi(PMe 3 ) 2 (Cl)] ( 5b ). The series was completed by treatment of 1a – 4a with PMe 3 , which afforded the related phosphine complexes 1b – 4b . All complexes were characterised in the solid state by single crystal structure elucidation and their magnetic moments in solution were determined by NMR experiments with the Evans method.