311. Study on Microwave Synthesis Mechanism of Carbon Dots Based on NMR Characterization 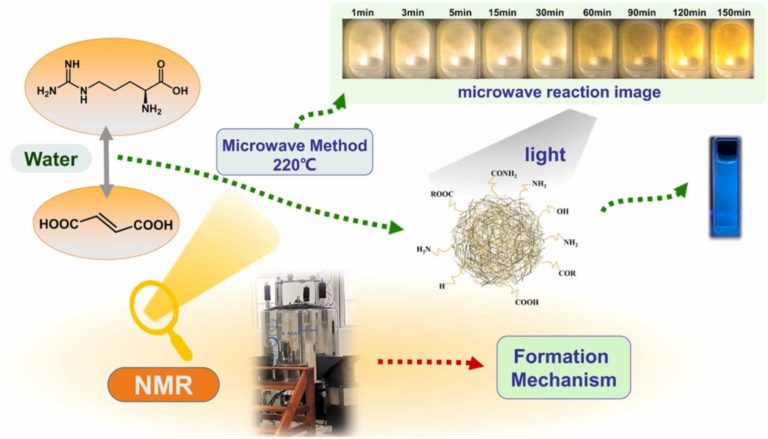 Carbon dots (CDs) have applications in various fields such as biomedicine and environmental monitoring because of its chemical stability and good biocompatibility et al. At present, one of the main points of CDs research is that the formation mechanism is not clear. The traditional hydrothermal method has a long cooling time and it is difficult to stop the reaction and obtain the product on time. Microwave reactors, however, can capture images and quickly heat and cool down. To monitor the reaction procedure and mechanism requires a special procedure. In this paper, nitrogen doped CDs (FA-CDs) with great water solubility, excellent stability and low cytotoxicity were prepared by microwave method with fumaric acid and arginine. The semi-in-situ NMR characterization of FA-CDs was carried out under different reaction times to track the reaction mechanism. The saturated chain in arginine and some double bonds in fumaric acid formed carbon nuclei, and the guanidine functional group, amino acid structures in arginine and carboxyl groups in fumaric acid were modified on the surface of FA-CDs. UV-vis absorbance spectra and fluorescence decay curves indicate that the luminescence properties of FA-CDs are mainly controlled by carbon nuclei and surface functional groups.