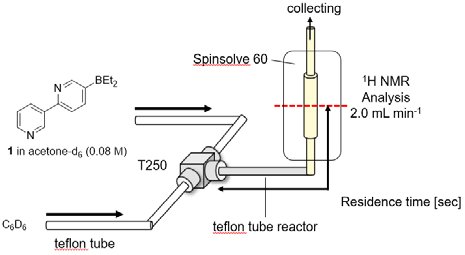 5-Diethylboryl-2,3′-bipyridine (1), which is inaccessible using conventional batch methods, was synthesized using a flow microreactor. Compound 1 was obtained as an equilibrium mixture of a cyclic trimer and a cyclic tetramer in solution, the latter of which was crystallized in benzene by vapor diffusion of hexane at 7 °C. The dynamic nature of this system was confirmed by solvent- and concentration-dependent experiments. Notably, the dynamics was verified using flow NMR spectroscopy, which revealed that the time required to reach equilibrium was influenced by the solvent ratio (<18 s, 24–28 s, and 34–42 s in 2:1, 1:1, and 1:2 mixtures of acetone-d6 and C6D6, respectively). Compound 1 and 3-[4′-(diethylboryl)phenyl]pyridine (2) exhibited different self-assembly behavior in solution and crystals. Density functional theory calculations suggested that this difference was largely due to enhanced planarity between two consecutive aromatic rings.