In this post, I’m going to discuss a specific test for evaluating the resolution or lineshape of a benchtop NMR system. This test is measured on proton (1H) as the NMR spectrum is sensitive to the spectrometer resolution and we can make the measurement with a single scan. Resolution and lineshape refer to the width of a particular NMR spectral line, measured at 50% and 0.55% of the height of the line, as explained below.  The smaller the linewidth value, the better the resolution.

The information content of any NMR spectrum depends on the ability to observe and resolve different signals, or peaks, in the spectrum. It is easier to distinguish two sharp (narrow) peaks close together, than two broad peaks. The key technical factor defining the sharpness of the lines in the spectrum (the lineshape) is the homogeneity of the magnetic field generated by the magnet.  Although NMR systems utilize an array of coils (“shims”) to further improve the B0 homogeneity, the achievable lineshape and resolution are strongly influenced by the inhomogeneity of the magnet itself. The process of calibrating the field and optimizing the B0 homogeneity is usually referred to as shimming. The homogeneity and resolution will gradually degrade over time, so you should carry out the shimming procedure whenever you want to ensure you have the best resolution your spectrometer is capable of.  You should also do the shimming procedure immediately before making the linewidth test described here.

The way to measure instrument resolution is to collect a spectrum containing a naturally sharp line. The standard approach for is to use a sample containing chloroform in acetone-d6 – the chloroform signal from this sample has a very narrow natural linewidth.1 Figure 1 shows a 1H NMR spectrum sample of a 20% chloroform in acetone-d6 NMR reference sample collected on an 80 MHz benchtop NMR spectrometer. (https://www.sigmaaldrich.com/catalog/product/sial/611859) 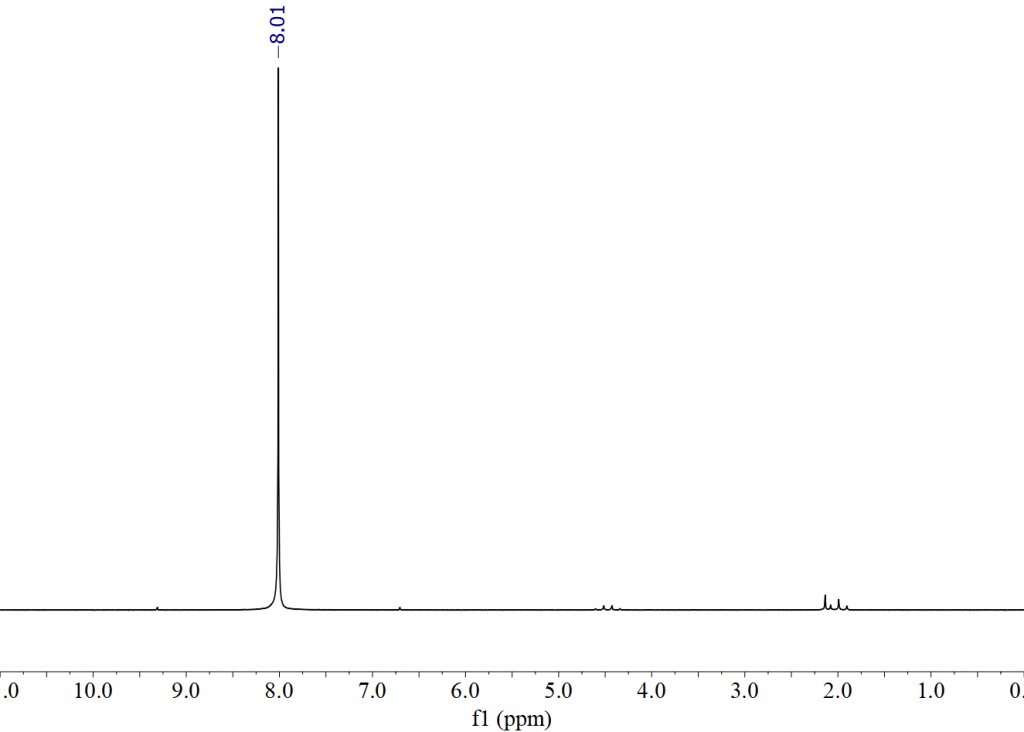 The measurement parameters used for this test are shown in Table 1 below Ref[2] and uses a standard 1D proton pulse and acquire sequence.  The system must be shimmed first so the measured lineshape is the best it can be. The sample must be sitting in the spectrometer for at least two minutes before you make the measurement.  If your spectrometer has “resolution enhancement” or “reference deconvolution” functions, these must be turned off as they will distort the measurement made by this test.

If we now look at the chloroform line in more detail, we can measure its width by setting the horizontal scale to plot in Hz, instead of the usual ppm. Figure 2 shows the same chloroform line with the frequency axis expanded around the peak, and now plotted in Hz.

Figure 2. Expansion of the spectrum shown in Figure 2 to show the chloroform signal

If we now increase the vertical scale of the spectrum we see that straddling the main signal are two smaller signals. These “carbon satellites” are at 0.55% the amplitude of the main signal and provide a reference point for assessing the line width at its base. We sometimes refer to this base as the “tails” of the peak. 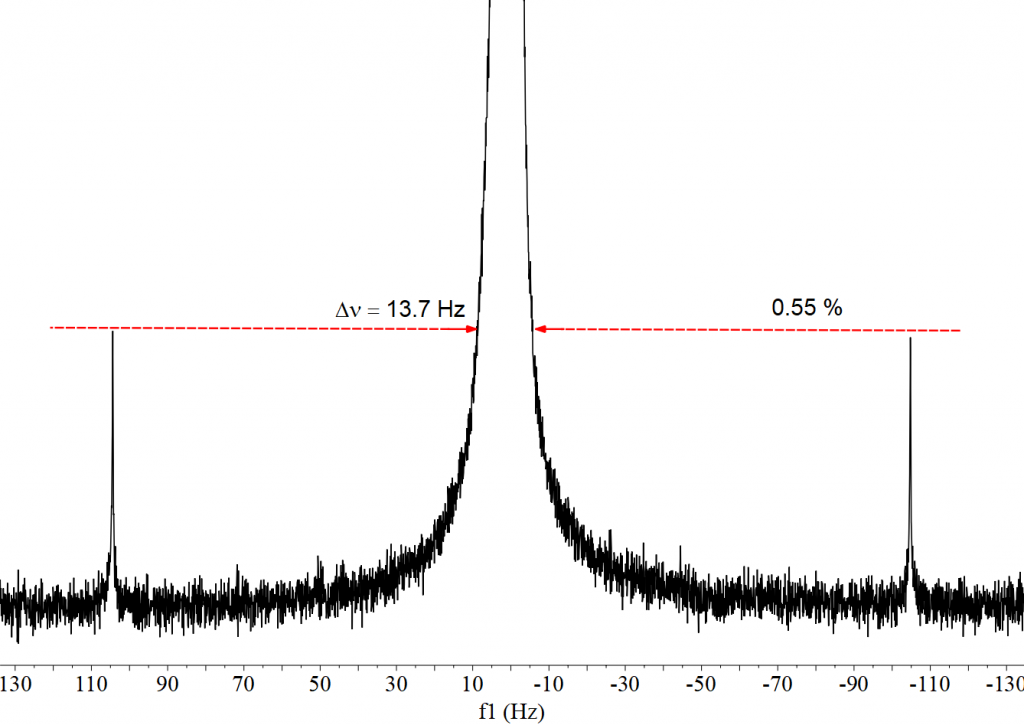 It should be noted that the linewidth specification at 0.55% is often more important than the one at 50%. This is especially true for benchtop NMR systems, where strong performance trade-offs have to be made at the time of designing the magnet. During the magnet optimization process, engineers look for the strongest magnetic field with the smallest possible magnet while keeping the diameter of the sample fixed at 5 mm. This trade-off between magnet size and field strength affects the B0 homogeneity. If the magnet becomes too small then a homogeneous field cannot be achieved across the entire portion of the NMR sample that gives rise to the NMR signal (“the active volume”). While the homogeneity of the field in the centre of the tube may be acceptable, yielding a reasonable 50% linewidth, the field gets quickly inhomogeneous as the wall of the tube is approached. As the signal originating from this inhomogeneous outer region is very broad it typically appears in the spectrum as broad “tails”.  Very importantly, since many of the nuclei in the sample are now contributing to the tails of the signal and not to the peak height, it also results in a serious loss of SNR, significantly reducing the sensitivity of the instrument, a performance characteristic I cover in my next post. Measuring the peak width at 0.55% provides a very clear and direct means of detecting this design error in the magnet.

A further measurement of linewidth can also be made at 0.11% of the peak height. At Magritek we do this for our highest resolution, Spinsolve ULTRA models, and we will discuss the importance of this in a separate post.