Paliperidone is the essential metabolite of risperidone, an atypical antipsychotic employed for the treatments of schizophrenia or bipolar disorders. Its chemical structure consists of a benzisoxazole moiety and it is less lipophilic than risperidone. Being an example of atypical antipsychotics, it acts more as a serotonin-receptor blocker than a dopamine-receptor one. The interested reader is referred to a review by Dolder et al. that describes the application of Paliperidone for the treatment of schizophrenia [1]. 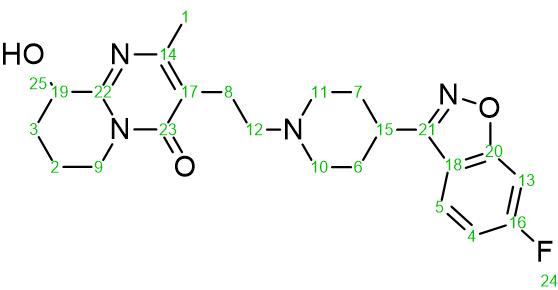 For a full and unambiguous assignment of the NMR signals to the according atoms of the molecule, a combination of 1D and 2D NMR techniques is crucial. The goal of this application note is to illustrate the steps required to perform the assignments and show how this can be used to verify the structure of a molecule.

The Paliperidone samples were prepared in CDCl3 with a concentration of 70 and 270 mM, respectively. 1H and 13C spectra were collected on a Spinsolve™ Carbon 80 MHz spectrometer with a 1H frequency of 80.40 MHz and a 13C frequency of 20.22 MHz.

Table 1 lists all the experiments and parameters used to assign the NMR signals to the according atoms.

Table 1: NMR experiments and parameters used to assign the NMR signals of Paliperidone. 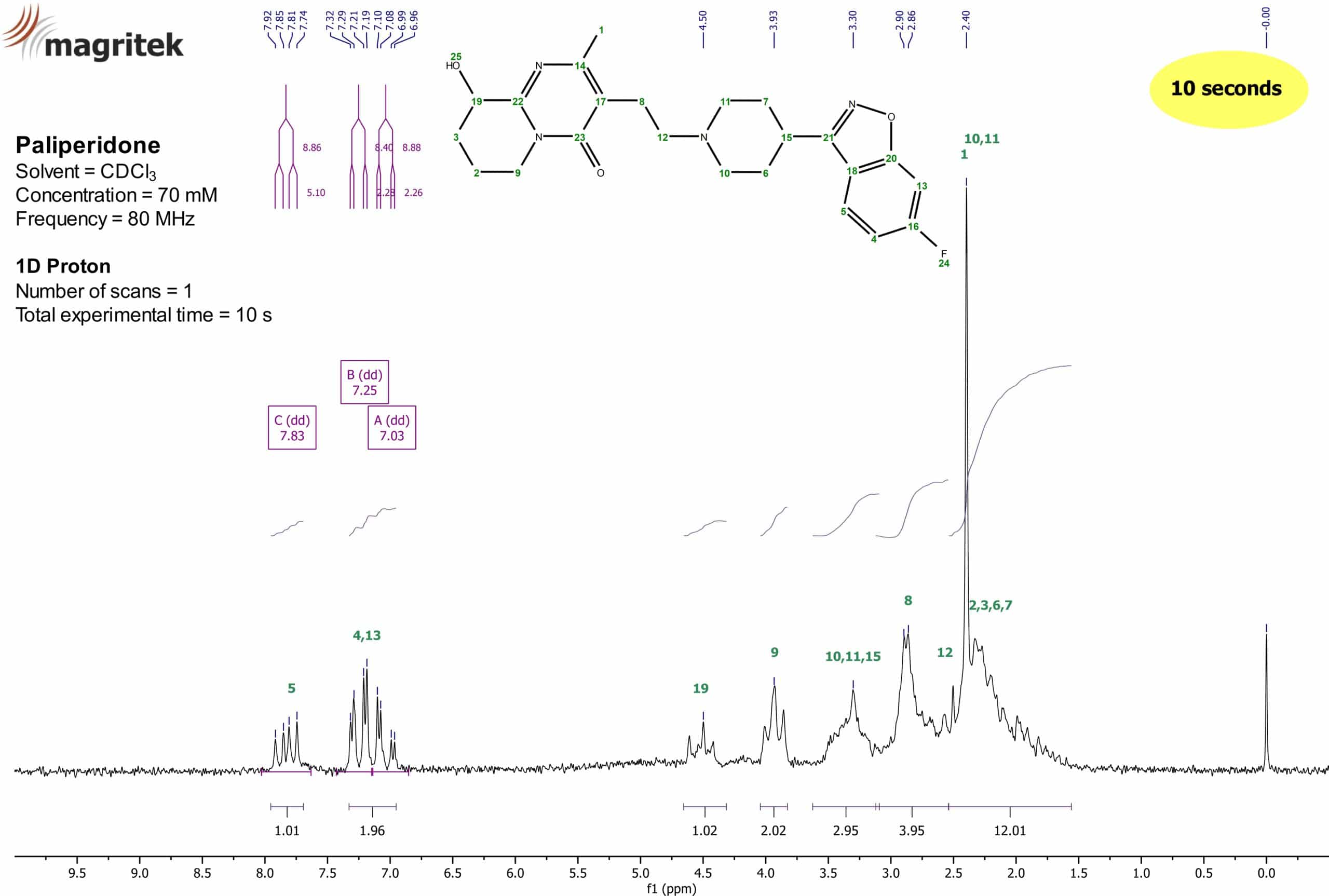 The 1H NMR spectrum in Figure 2 was obtained after a one scan experiment on the Spinsolve™ Carbon 80 MHz NMR system. After performing the standard steps of data processing on the spectrum (apodization, baseline correction, phase correction etc.), the spectrum was ready for the evaluation. As a reference, TMS was employed and set to 0.00 ppm. Thereafter, the chemical shifts of the proton peaks were assigned (blue shifts on top). After setting the integrals onto the different peaks (violet areas at the bottom of the spectrum), a first indication of the assignments can be done.

In the aromatic region of the spectrum between 6 and 10 ppm, two sets of signals are visible. One appears at about 7.83 ppm and the other is situated around 7.19 ppm. Due to the integral values of 1.01 and 1.96, these two sets of signals belong to three protons in total. According to the structure, those three protons can only belong to the assigned protons at the positions 4, 5, and 13. To assign these signals even more accurately, the splitting pattern as well as the coupling constants of the NMR peaks need to be taken into account. A characteristic splitting pattern should be detectable for the 1H signals of the aromatic protons bearing a 19F nucleus in its close proximity. In theory according to the n+1 rule, a doublet of doublets (dd) as splitting pattern is expected for protons 5 and 13 whereas a doublet of doublets of doublets (ddd) should appear for proton 4, respectively. Since the 19F nucleus has also a spin of ½, heteronuclear couplings between 1H and 19F are detectable.

The signal at 7.83 ppm with the integral of 1.01 is displayed as a doublet of doublets (dd) with coupling constants of 8.86 Hz and 5.10 Hz, respectively. Therefore, the proton which is causing this signal has two chemically not equivalent “neighbours” in its spin system with two different values for the coupling constants. The value of 8.86 Hz as a coupling constant is known to result from a typical interaction of an indirect coupling with three bonds between the coupling species in an aromatic system. Consequently, this is obliged to be a 3J coupling either from a proton-proton interaction or a proton-fluorine interaction. The second coupling constant of this proton has a value of 5.10 Hz. Since the only interaction left in this spin system is a coupling with four bonds between the moieties, this value displays a 4J coupling. Typical 4J proton-proton couplings in aromatic systems have values way lower than the given number (e.g. 1–3 Hz) which means that this signal at 7.83 ppm can only be assigned to proton 5 from the Paliperidone structure with a proton-fluorine 4J coupling of 5.10 Hz and a 3J proton-proton coupling of 8.86 Hz, respectively. Moreover, if this signal would be assigned to proton 4, an additional coupling constant for the third coupling within this spin system must have been detected which is clearly missing.

For the assignments of the aliphatic signals, more 1D and 2D NMR measurements were necessary since there is no clear coupling pattern visible due to a large number of protons in this area between 1 and 5 ppm. Nevertheless, the signal at 4.50 ppm with an integral value of 1.12 could be assigned provisorily to proton 19. The direct electron withdrawing effect of the hydroxyl group 25 (inductive effect) could cause the large chemical shift and separate this signal from the rest of the aliphatic protons. This assumption has to be validated with additional 2D measurements. 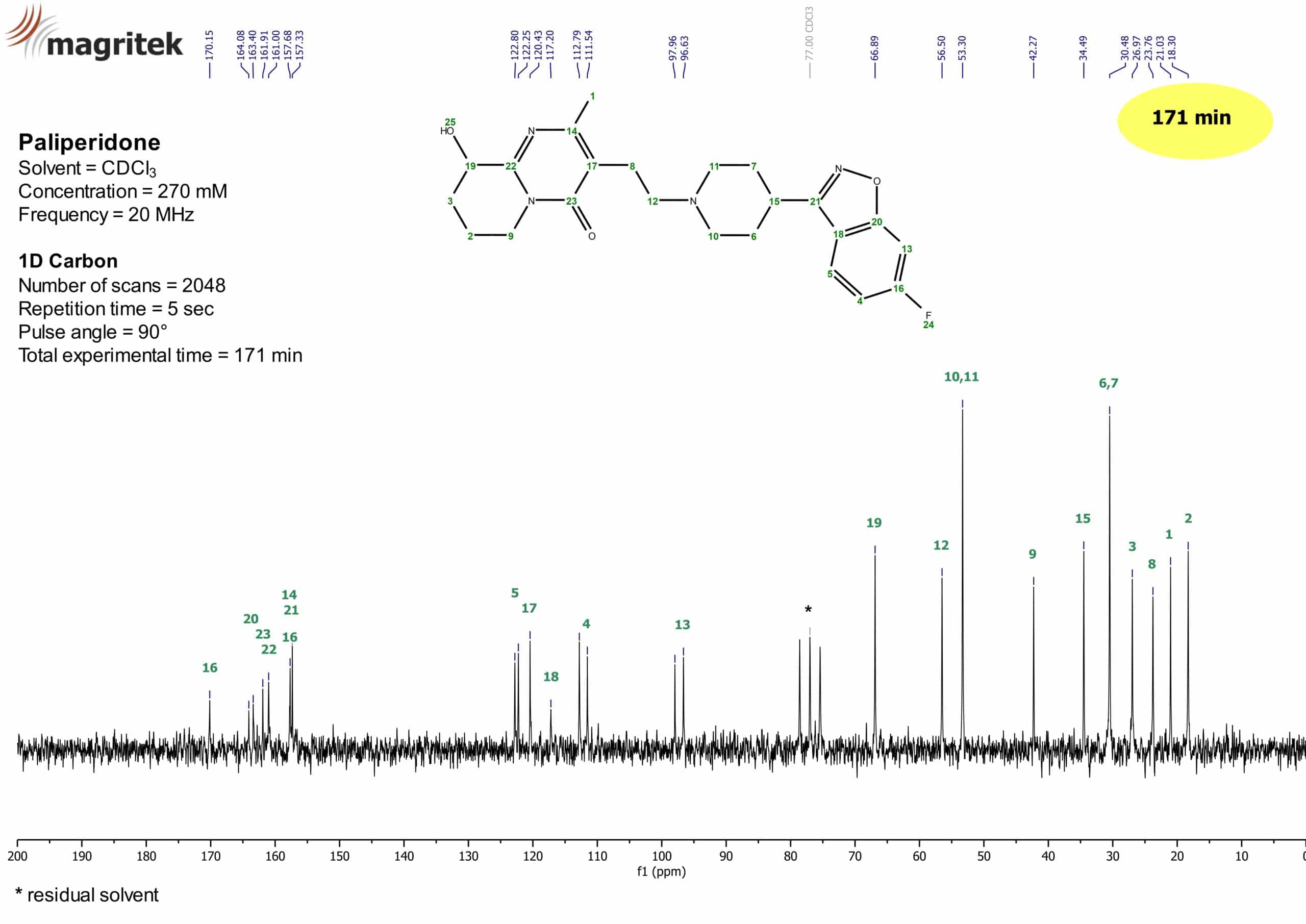 PrevPreviousqNMR on samples from the production plant – Quantify multiple analytes without sample preparation in the presence of protonated solvents with a single measurement.
NextHow simultaneous decoupling of 1H and 19F can help to simplify crowded 13C spectra – A Multi-nuclei case study on 5-Bromo-1,2,3-trifluorobenzene without the need of user interventionNext