Ionic liquids have different roles in various fields and applications, but one of the most studied is their use as electrolytes in Lithium-ion batteries. The mobility of lithium cations is a key parameter to consider in the transport of energy, and consequently for the formulation of ionic liquids as electrolytes. The self-diffusion coefficient of any chemical species can be measured by benchtop NMR spectroscopy if it contains an NMR active nucleus. This is the case for 7Li, which is the most abundant isotope of lithium (92 %), making the study of lithium based ionic liquids with benchtop NMR straightforward.

Figure 1. Chemical species contained in the two ionic liquids studied in this work.

Both ionic liquids contain three active NMR nuclei: 1H, 19F, and 7Li. As the anions and cations present in these samples contain only one of the active nuclei, the measurement of the self-diffusion coefficient of each ion becomes very simple, as no signal overlapping between different species can be expected. The two considered ionic liquids have the same molar ratio and only differ by the composition of one cation. Consequently, this study highlights the influence of these cations on the overall ion mobility.

In this study, we used a Spinsolve 80, which provides a magnetic field of 1.84 T that defines a Larmor frequency of 80.44 MHz for 1H, 75.51 MHz for 19F, and 31.19 MHz for 7Li. This spectrometer is equipped with Pulsed Field Gradient (PFG) capability, which is described in more detail below.  After transferring 500 µL of these two ionic liquids into respective NMR tubes (OD 5mm), the 1D NMR spectra provided in Figure 2 were recorded. 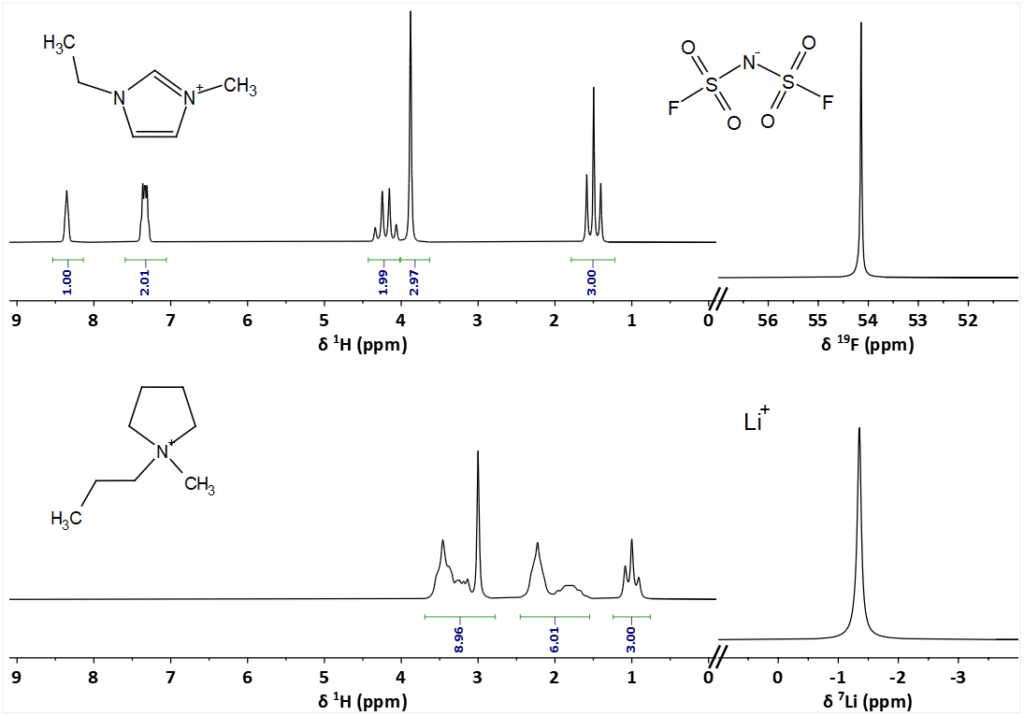 The two different cations (imidazolium and pyrrolidinium) have different 1H NMR signals that can be used to determine the diffusion coefficient of each molecule. In the two ionic liquids, 19F NMR provides a unique singlet for the bis(fluorosulfonyl)imide (two equivalent fluorine) close to 54 ppm and 7Li NMR provides a unique singlet for the Lithium cation close to -1 ppm. The T1 of all these signals was measured for these molecules and the values stay in the range of 300 – 800 ms for the LiFSI:EmimFSI and 200 – 500 ms for the LiFSI:PYR13FSI. The shorter T1 values, as well as the broader line widths in 1H NMR, already suggests that the viscosity of LiFSI:PYR13FSI is higher than for LiFSI:EmimFSI.

To measure a diffusion coefficient this pulse sequence must be repeated for increasing magnetic field gradient strengths. The set of collected spectra shows signals that attenuate as the gradient strength increases in a way described by the following equation:

In this equation, γ is the gyromagnetic ratio of the nucleus, g is the gradient strength, and δ and Δ are the delays described in Fig. 3. The duration of δ and Δ must be set according to the properties of the sample. As these parameters are all known, the logarithm of the signal can be plotted to obtain a linear decay against γ2.g2.δ2.(∆-δ/3) with slope -D. As the different molecules in the samples are dissolved at high concentrations (of the order of  a few molar per liter), the diffusion measurements can be carried out very quickly (three minutes per curve in this study). 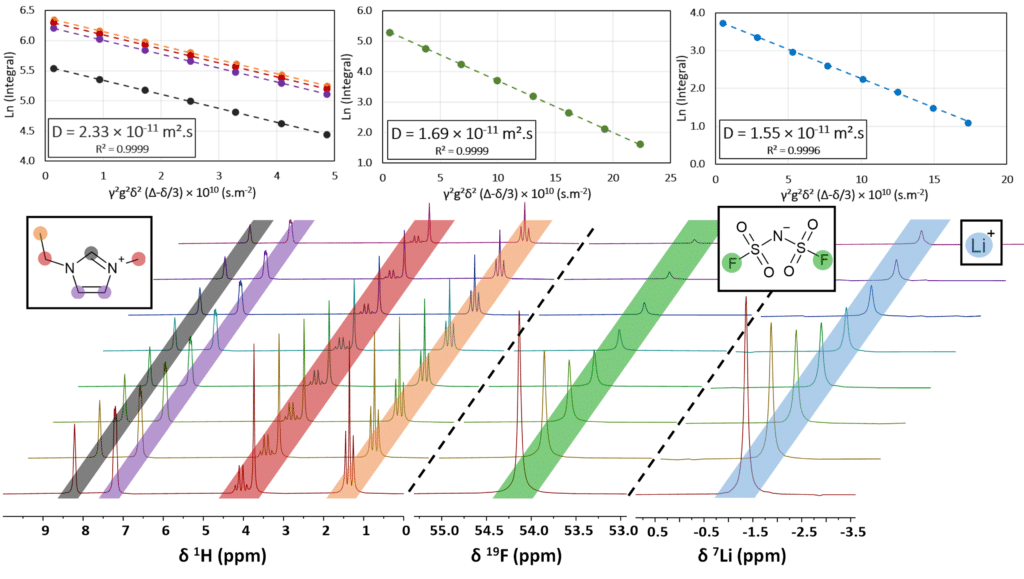 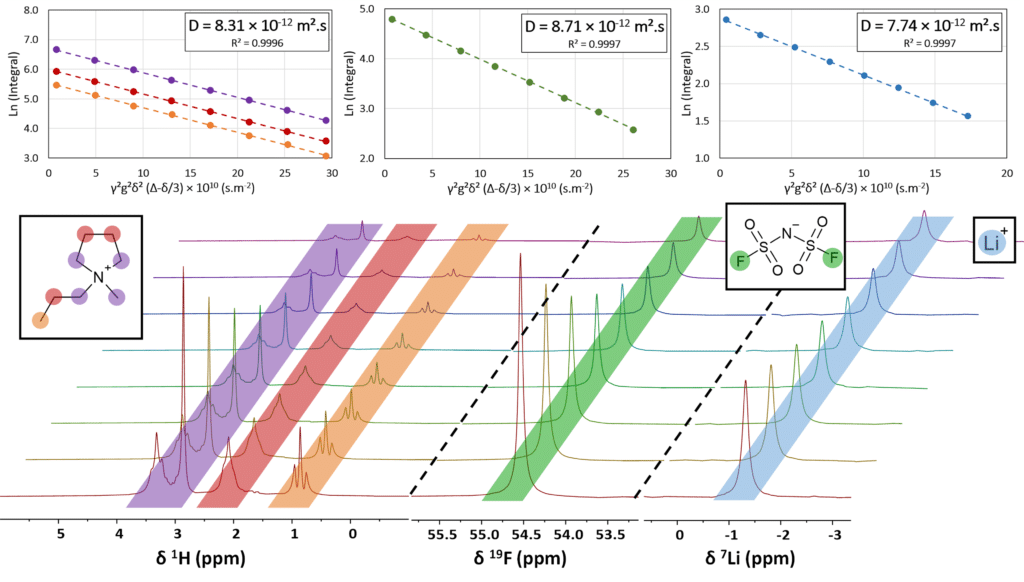 This study shows the capability of benchtop NMR to measure the diffusion coefficients of the different cations present in ionic liquids. The multinuclear capability of the Spinsolve spectrometers makes it possible to use any NMR active nucleus to probe the mobility of different molecules dissolved in the sample. In this work the analysis was performed through 1H, 19F and 7Li NMR and all PFGSTE experiments could be run in about 3 minutes. This method can easily be applied to study other ionic liquids containing other nuclei, e.g. 31P, just by selecting the experiments in a user-friendly fashion in the Spinsolve software and without requiring any user intervention at the time of switching from nuclei to nuclei. This technique shows a great potential to investigate the effect of the ionic liquid formulation in the molecular mobility (nature of ions, concentration ratios, etc.).