In a previous blogpost we showed how benchtop NMR can be utilized to determine the molecular weight of polymers by using the ratio between the end-group and the backbone signals. The polymer examples shown there were so-called homopolymers as they are made from a single type of monomer. Most commodity plastics like polyethylene, polypropylene, or polystyrene are of this type. However, there are as well many applications where more specific properties of polymers are desired. One way to tune such properties (mechanical, thermal, etc.) is the preparation of copolymers, which are made from two or more different monomers. The properties of these copolymers are defined by the characteristics of each monomer, but as well by the ratio of them within the copolymer. This molar ratio of the repeating units can simply be determined by NMR, setting the integrals of the monomer signals in relation to each other and considering the number of protons of each integrated region. In this way the monomer ratio can be calculated using the following equation: 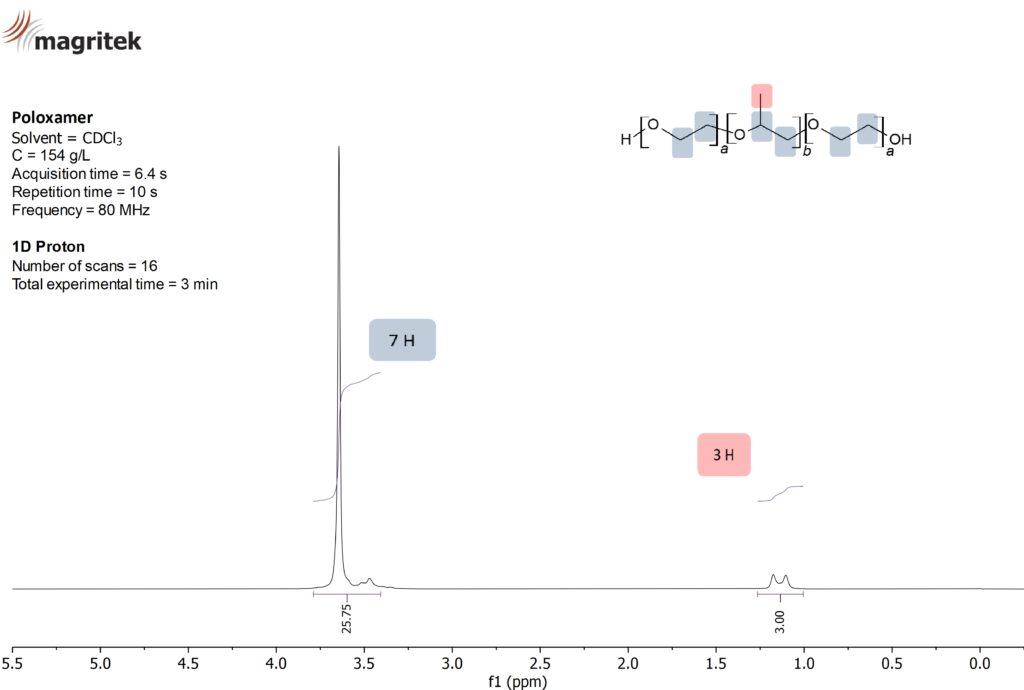 One type of copolymers are poloxamers. These are synthetic tri-block copolymers composed of two poly(ethylene oxide) (PEO) blocks and one poly(propylene oxide) (PPO) block and possess temperature dependent self-assembling and thermo-gelling behavior. They form thermo-reversible hydrogels, which are used in drug delivery for ophthalmic administration. Before injection, the poloxamer (with the therapeutic and the excipients) is in solution at room temperature. However, once injected into the eye the formulation heats up to body temperature, turns into a gel, and immobilizes the therapeutic so that a higher residence time is achieved.

As the thermo-reversible behavior strongly depends on the molecular weight and the hydrophilic/hydrophobic molar ratio of the triblock copolymer, it is important to be able to determine the monomer ratio. In the 1D proton spectrum collected on a Spinsolve 80 spectrometer (Figure 1), the integral of the signal at ~ 3.6 ppm includes 4 protons of the PEO and 3 protons of the PPO. As the signal at ~ 1.2 ppm corresponds to the 3 protons of the PPO methyl group the following equation for the ratio of PEO/PPO can be applied:

In a further step, the integral ratio can as well be used to determine the weight percentage of oxyethylene. You can find more information about this in Application note 15.

As a second example we looked at the characterization of Eudragit® S100. Eudragit S is a brand of Evonik and refers to a group of functional copolymers of methacrylic acid and methyl methacrylate with pH stimuli properties (dissolution at pH above 7), that are used as coating polymer for tablets for delayed drug release. In fact, this coating allows to protect the drug from the acidic environment of the stomach so that the therapeutic agent contained in the tablet is specifically released in the ileum and colon.

Considering that the aliphatic signal includes 5 protons of each unit and the signal at 3.5 ppm corresponds to the 3 protons of the methyl group of the ester (Figure 2), the equation for the ratio can be written as: 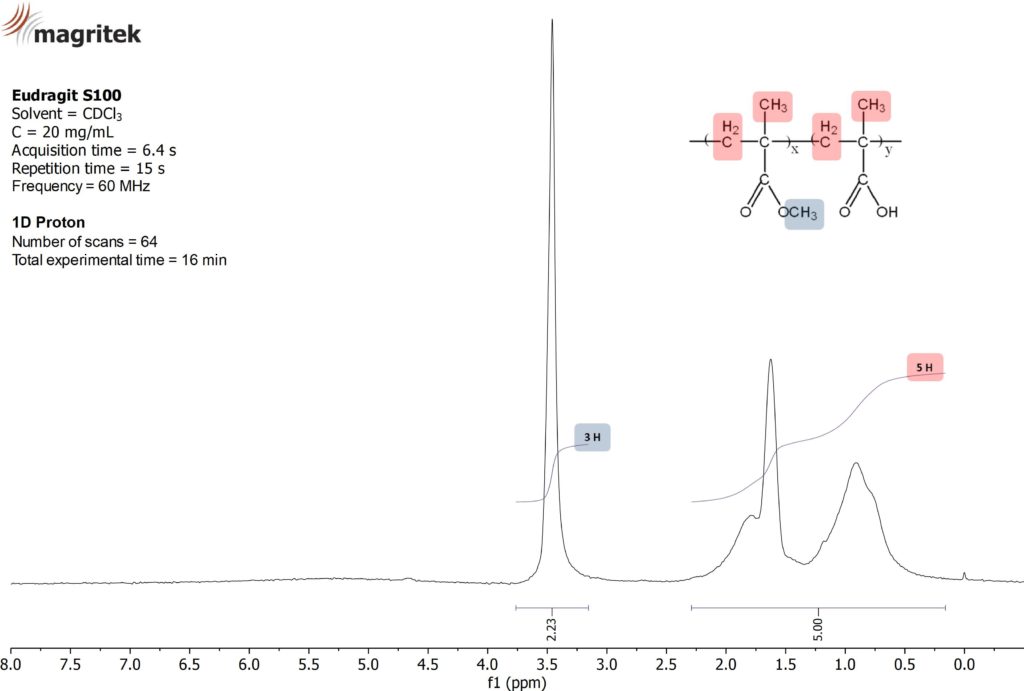 Figure 2: 1D 1H spectra of Eudragit with a molar ratio of ester/acid of 2.89 recorded on a Spinsolve 60 MHz.

For the third example we were provided with the cationic copolymer of poly(ethylene oxide)-b-poly(vinylbenzyl trimethylammonium chloride) (PEO-b-PVBTA) which was synthesized by Jakob Stensgaard Diget, Norway. Cationic polymers are used among others as delivery media for nucleic acid-based drugs. In his article [1] Dr Diget studied the kinetic pathways for coacervation and micelle formation between PEO-b-PVBTA and poly(sodium 4-styrene sulfonate). An important parameter for the success of the formation of stable micellar nanostructures is the molecular weight and the monomer ratio of PEO-b-PVBTA. Both parameters can now be determined with a single 1D proton measurement.

In Figure 3, the 1D 1H spectrum recorded on a Spinsolve 80 MHz is compared with a measurement performed on a 400 MHz system. Both spectra look similar, with broad signals for the polymer repeating units (b,d,e,f,g) a singlet for the methyl group which terminates the PEO block (a) and a multiplet of the two methyl groups in the junction between PEO and PVBTA (c). Calculations of the degree of polymerization of the VBTA unit (taking in account the integral values a and c) result in 31 for the 400 MHz and 27 for the Spinsolve, while the obtained PEO/PVBTA ratio is 1.42 for both systems.

The different examples shown here highlight the possibility to use benchtop NMR for the characterization of a variety of copolymers, which is reinforced by the excellent agreement with data collected on a high field system.