Together with sensitivity, resolution is one of the most important quality parameters determining the performance of an NMR spectrometer. By definition, the resolution of a spectrometer is determined by the homogeneity of the magnetic field generated by the magnet and it specifies what is the narrowest possible linewidth that can be measure in the spectrum. As the natural linewidth of the signals in the spectrum is also determined by the molecular structure and mobility of each compound (larger molecules tend to generate broader peaks) the resolution measurement needs to be done with a sample whose natural linewidth is much smaller than the resolution to avoid masking the measurement. As accepted ASTM standard, the resolution of an NMR spectrometer is determined using a reference sample of chloroform dissolved at a concentration of 20% in deuterated acetone (20% CHCl3 in acetone-d6). The linewidth is specified at 50% of the amplitude of the chloroform signal but also at 0.55% (height of its carbon satellites), and 0.11%. Magritek has invested a huge effort to develop permanent magnets with the highest homogeneity available in the market. For example, the linewidth values specified for our Spinsolve™ 80 MHz ULTRA systems are <0.25 Hz at 50%, <10 Hz at 0.55%, and <20 Hz at 0.11%. The reason why these three values are specified is to make sure the user can determine the ability to resolve peaks of similar amplitude (the specification at 50% is important) but also peaks with much smaller amplitude expected at the side of large signals. The narrower the linewidth at 0.55% and 0.11%, the higher are the chances to resolve and quantify smaller signals expected close to large peaks in the spectrum. These specifications are particularly important for samples dissolved in protonated solvents, where our ULTRA models achieve the highest performance at the time of implementing solvent suppression techniques. However, this superb homogeneity allows one to resolve narrow peaks in the spectrum like no other spectrometer available today.

In this blog post we demonstrate the unique ultra-high resolution of our Spinsolve 80 MHz Carbon ULTRA benchtop system by resolving long-range J couplings (up to 5J) for furfural in deuterated chloroform (Figure 1). This structure shows long-range J couplings as small as 0.07 Hz, which can be beautifully observed in the NMR spectrum acquired with our Spinsolve 80 ULTRA. 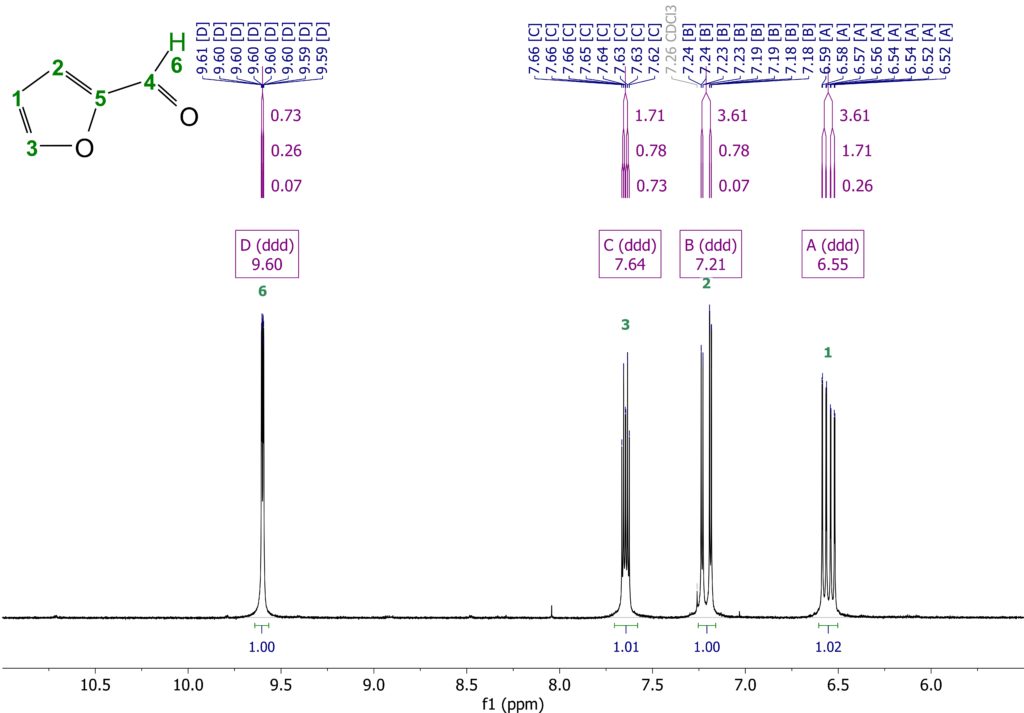 Figure 1: 1D 1H NMR spectrum of furfural acquired in a single scan (250 mM in CDCl3) on a Spinsolve 80 MHz Carbon ULTRA. To collect the long signal of furfural, a total acquisition time of 26 seconds was used.

The furfural spectrum was acquired in a single-scan experiment with a total acquisition time of 26 seconds. The spectrum is zoomed in to show the aromatic protons as well as the aldehyde moiety. According to the chemical shifts and the coupling patterns obtained, a correct assignment of all proton signals for the given numbering of the furfural structure is straight forward. All proton signals are very well resolved and display correct integration values. Moreover, all chemical groups are split by three J coupling constants into eight peaks (ddd). Table 1 displays all detected coupling constants for furfural.

Due to the endocyclic oxygen atom, the coupling constants observed are usually smaller than the ones of the corresponding e.g. cyclopentadiene. Moreover, since the scaffold under investigation is an aromatic system equipped with a full π-delocalization of its electrons, long-range couplings like the 5J1,6 coupling were detected. Thanks to the high-resolution of the Spinsolve 80 MHz Carbon ULTRA system, we were able to detect coupling values down to 0.07 Hz (coupling 4J2,6 between the protons 2 and 6). This value was detected for both chemical groups (2 and 6) in the 1H NMR spectrum (Fig. 1), which confirms the assignments. To show the multiplet structure in more detail, a zoom of the groups 1 and 2 is shown in Figure 2 and 3, respectively. 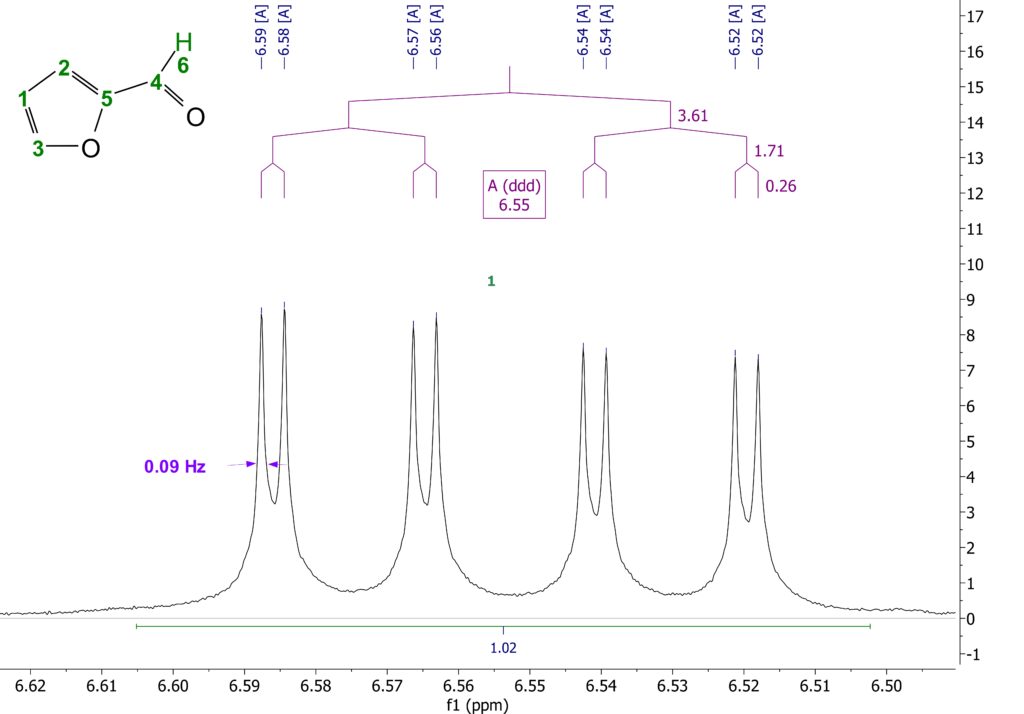 Figure 2: Zoom of the proton peak of position 1 within the furfural scaffold.

Since the doublets in Fig. 2 of the proton 1 are separated well enough, the linewidth at 50% of the peak height can easily be determined to a value of 0.09 Hz. Due to this remarkable linewidth, the coupling pattern of proton 2 and even its smallest coupling constant of 0.07 Hz can easily be identified (Figure 3). 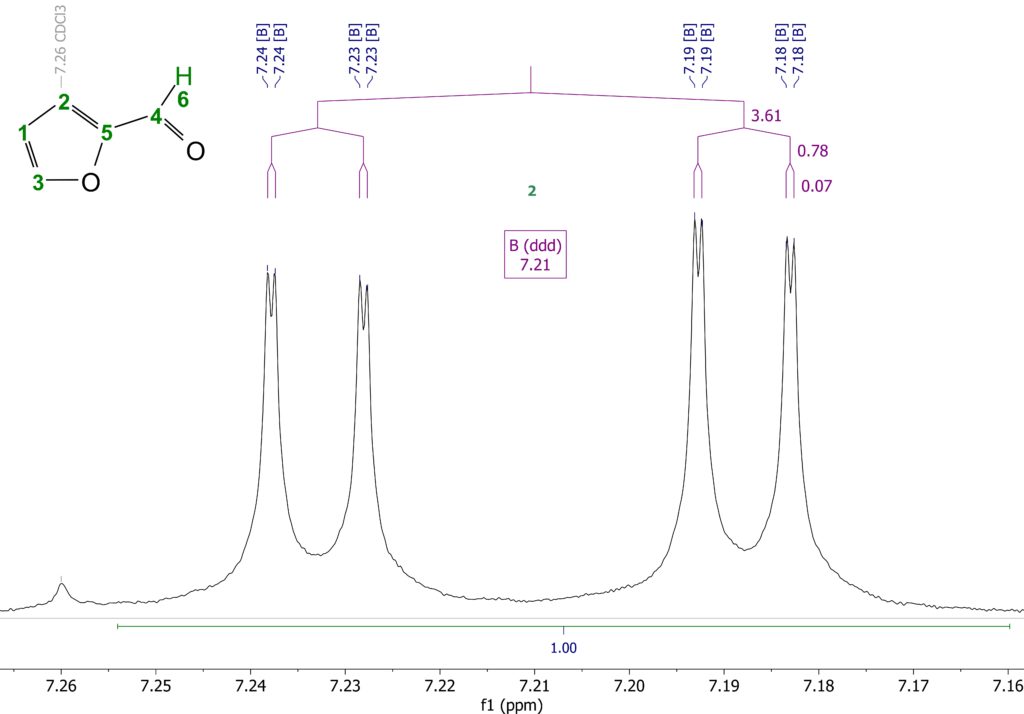 Figure 3: Zoom of the proton peak of position 2 within the furfural scaffold.