Solvent suppression: the key to measure your samples every time you need while they are synthesized

Figure 1. Spinsolve NMR spectrometer used in the chemistry lab for quick analysis of products. The typical presence of protonated solvents in the sample requires the use of solvent suppression and carbon decoupling methods to acquire the spectra of analytes of interest.

NMR spectroscopy in the chemistry lab

Benchtop NMR spectrometers have been developed to work in the chemistry lab, where chemists can use them to quickly analyze their samples as they are produced. These compact NMR systems can be simply installed on the chemistry bench or directly inside the fume hood to identify or quantify products in real time, as your synthesis proceeds. A key challenge that appears when samples need to be measured as they come out from the process comes from the that the products are typically dissolved in regular protonated solvents. For fast sample analysis it is important to minimize sample preparation. For example, the tedious workup required to exchange solvents is not desired. To acquire NMR spectra in the presence of protonated solvents in the sample requires the implementation of methods able to attenuate the large solvent signals, which can easily be up to four orders of magnitude larger than the signals of the products. The solution known from high-field NMR is to apply solvent suppression methods that selectively attenuate the solvent signals before the NMR signal is acquired. However, as these methods
are based on selective frequency excitation, they can only work efficiently if the magnetic field generated by the magnet is highly homogeneous. In a homogeneous magnetic field all nuclei of a particular chemical group have the same resonance frequency and can be efficiently attenuated when they are excited at the center frequency of the signal. To meet the required standards Magritek introduced the Spinsolve ULTRA models. These models are the only benchtop spectrometers that deliver a homogeneity comparable to the standards of superconducting magnets, where the line-shape is specified at 50%, 0.55%, and 0.11% of the peak height.

To demonstrate the performance of the WET solvent suppression method implemented on a Spinsolve ULTRA spectrometer, a sample of histidine dissolved at a concentration of 10 millimolar in neat water was used. Neat water has a 1H concentration of 110 Molar (two 1H per molecule) contributing to a single peak. The full-scale and zoomed spectra (Fig. 2a and 2b) show the comparison between the standard spectrum (black) and the one obtained with solvent suppression (red). Taking into account that the solute has a concentration that is four orders of magnitude smaller than the solvent, a large vertical zoom is required to see the signals of histidine (see Fig. 2b). In the standard spectrum the signals of histidine (Fig. 2b black) appear mounted on the tails of the water peak, which covers a big fraction of the spectrum and makes quantification almost impossible. Note that the sample does not require any D2 O as Spinsolve benchtop NMR spectrometers are equipped with an external hardware lock system that works independently of the sample being measured. 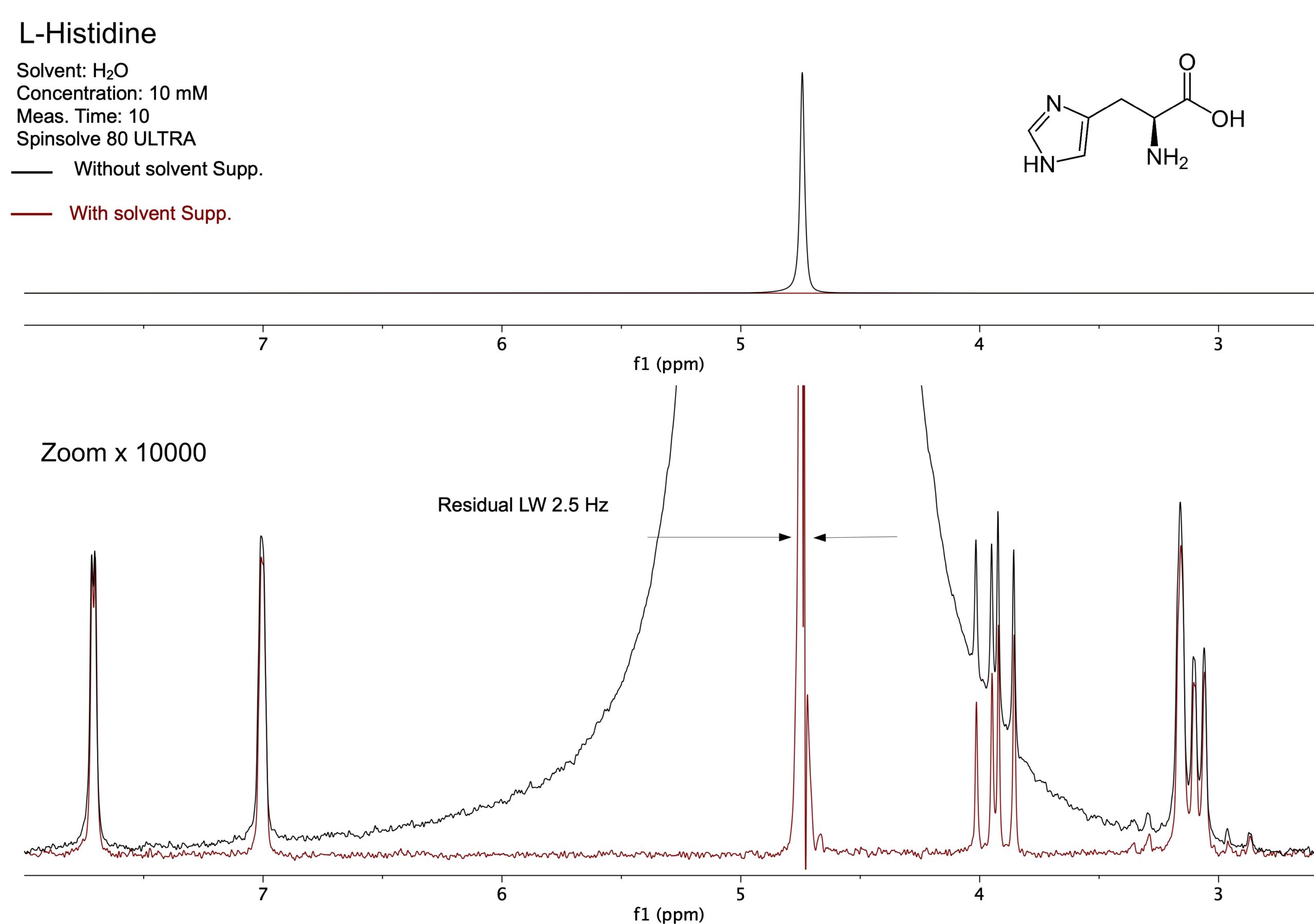 Figure 2. Spectra of histidine dissolved at a concentration of 10 mM in water acquired with a standard sequence (black) and using a WET solvent suppression sequence (red). a) Full scale spectra where only the water signal is visible, as it has a concentration of 55 Molar (effective 110 Molar of 1H). b) The spectra from a) shown with a x 10000 vertical zoom. In this scale, it can be observed how the signals of histidine overlap with the tails of the huge water peak in the standard experiment (black), but can be all very well resolved on the spectrum acquired with a solvent suppression method (red). It can be observed that the water peak is attenuated to the point where the tails are efficiently removed without affecting the signals of histidine as they appear at resonance frequencies different than the one of water. The spectra in b) were acquired using 64 scans and a repetition time of 10 seconds on a Spinsolve 80 MHz Carbon ULTRA.

Although the water peak extends over a wide region in the spectrum, it can be strongly attenuated by applying a WET module at the central frequency of the peak. The spectrum acquired with solvent suppression is shown in red in Fig. 2a and 2b. In this experiment, the water peak has attenuated a factor of about 1000, while the signals corresponding to histidine remained unaffected and can be accurately quantified.