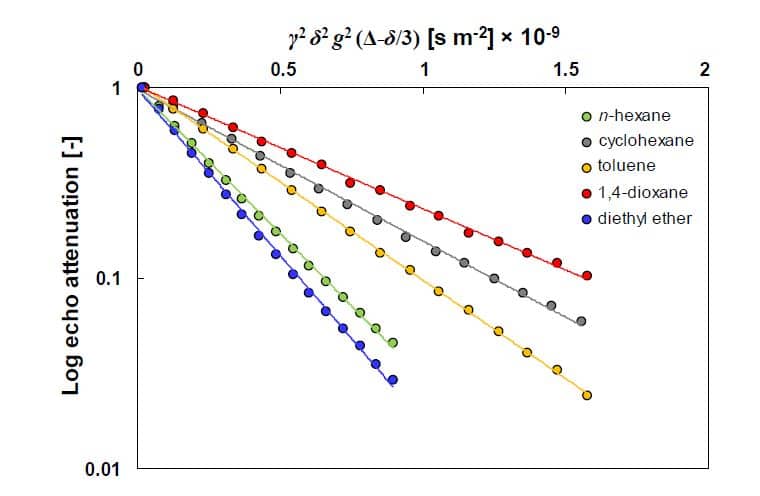 Solvent effects in homogeneous catalysis are known to affect catalytic activity. Whilst these effects are often described using qualitative features, such as Kamlet‐Taft parameters, experimental tools able to quantify and reveal in more depth such effects have remained unexplored. In this work, NMR diffusion and T1 relaxation measurements have been carried out to probe solvent effects in the homogeneous catalytic reduction of propionaldehyde to 1‐propanol in the presence of aluminium isopropoxide catalyst. Using data on diffusion coefficients it was possible to estimate trends in aggregation of different solvents. The results show that solvents with a high hydrogen bonding accepting ability, such as ethers, tend to form larger aggregates, which slow down the molecular dynamics of aldehyde molecules, as also suggested by T1 measurements, and preventing their access to the catalytic sites, which results in the observed decrease of catalytic activity. Conversely, weakly interacting solvents, such as alkanes, do not lead to the formation of such aggregates, hence allowing easy access of the aldehyde molecules to the catalytic sites, resulting in higher catalytic activity. The work reported here is a clear example on how combining traditional catalyst screening in homogeneous catalysis with NMR diffusion and relaxation time measurements can lead to new physico‐chemical insights into such systems by providing data able to quantify aggregation phenomena and molecular dynamics.