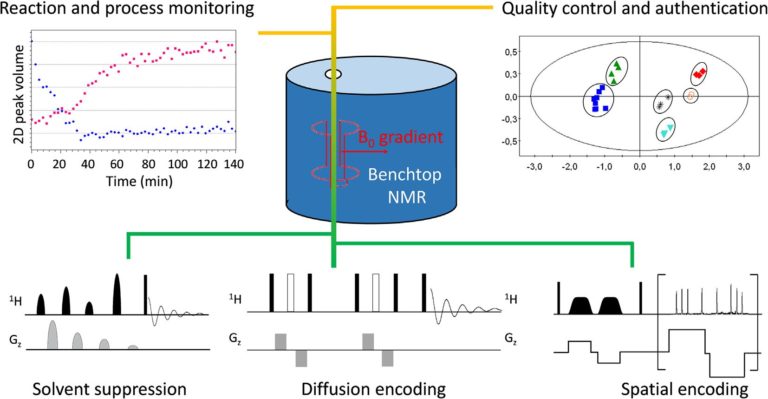 Benchtop NMR spectroscopy has been on the rise for the last decade, by bringing high-resolution NMR in environments that are not easily compatible with high-field NMR. Benchtop spectrometers are accessible, low cost and show an impressive performance in terms of sensitivity with respect to the relatively low associated magnetic field (40–100 MHz). However, their application is limited by the strong and ubiquitous peak overlaps arising from the complex mixtures which are often targeted, often characterized by a great diversity of concentrations and by strong signals from non-deuterated solvents. Such limitations can be addressed by pulse sequences making clever use of magnetic field gradient pulses, capable of performing efficient coherence selection or encoding chemical shift or diffusion information. Gradients pulses are well-known ingredients of high-field pulse sequence recipes, but were only recently made available on benchtop spectrometers, thanks to the introduction of gradient coils in 2015. This article reviews the recent methodological advances making use of gradient pulses on benchtop spectrometers and the applications stemming from these developments. Particular focus is made on solvent suppression schemes, diffusion-encoded, and spatially-encoded experiments, while discussing both methodological advances and subsequent applications. We eventually discuss the exciting development and application perspectives that result from such advances.